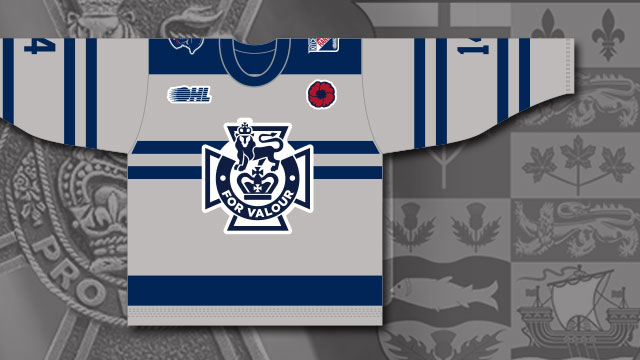 The 2014 Kitchener Rangers Remembrance Day Jersey will be worn on Sunday, November 9 when the Rangers host the Saginaw Spirit at 6:00pm. This is the tenth year that the Rangers have worn a commemorative jersey, each with a unique design in tribute to our veterans and members of the Canadian Forces. The game-worn jerseys will only be available for fans to purchase through a game-day silent auction.

The 2014 Remembrance Day Commemorative Jersey pays homage to more than 650,000 brave service men and women from Canada and Newfoundland who served in World War I. As we commemorate the 100th Anniversary of the start of the Great War, we remember more than 66,000 soliders who gave their lives and over 172,000 who were wounded on the battlefields of Europe. Here at home, Waterloo County raised two battalions of soldiers who traveled overseas with the Highland Fusiliers and who returned home with numerous battle honours.

This year’s sweater is inspired by the Victoria Cross, the British Commonwealth’s highest honour for conspicuous bravery, valour or sacrifice in the face of the enemy.  This most famous British military valour decoration was introduced in 1856, and was awarded to 64 Canadians for actions during World War I. Three of those recipients: Sergeant Frederick Hobson; Lieutenant Samuel Lewis Honey; and Captain George Fraser Kerr, are honoured on memorial plaques located outside of today’s Cambridge Armoury.

Fans may bid on these special jerseys through a silent auction during the game on Sunday, November 9. Bidding will start at 4:30pm and close 10 minutes after the end of the game. Winners will be notified by telephone. All proceeds from the auction will benefit the 78th Fraser Highlanders Fort Conestoga Garrison, the Juno Beach Centre Association and the Kitchener-Waterloo Poppy Fund. Over the past nine years, the Rangers commemorative jersey auctions have raised more than $210,000 for various beneficiaries.