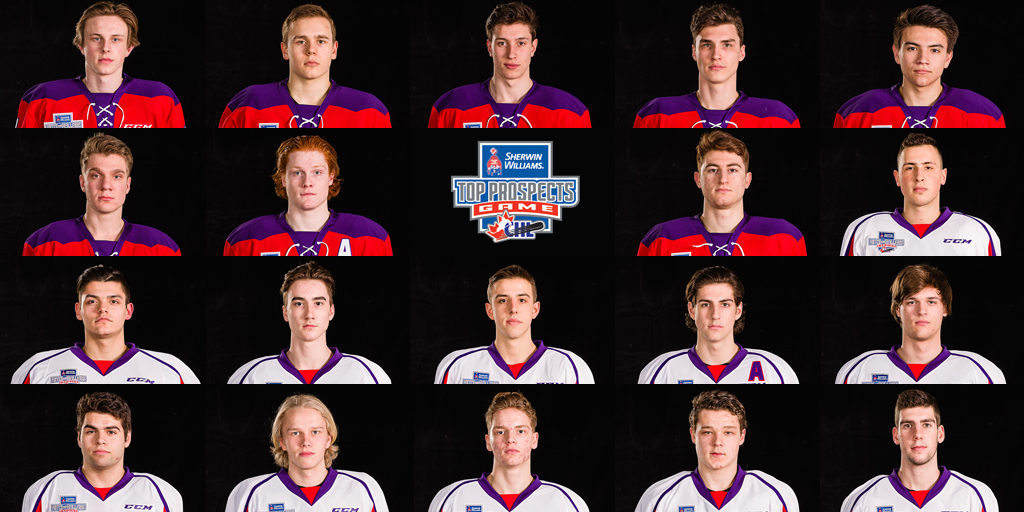 It’s a night where alliances are put on hold and friendships take a back seat as friend and foe alike comes together at the Sherwin-Williams CHL/NHL Top Prospects Game to show the hockey world what they’re made of.

Hundreds of scouts will be in attendance at Centre Vidéotron in Quebec City as Team Cherry and Team Orr square off in the 22nd annual showcase that pits 40 of the CHL’s top draft eligible prospects from coast-to-coast up against one another.

A total of 19 OHL players will suit up tonight, with five different sets of teammates finding themselves on opposite benches, surrounded by new teammates.

“It’s going to be interesting, that’s for sure,” said Hamilton Bulldogs winger Matthew Strome who will be separated from longtime friend and teammate MacKenzie Entwistle of Team Cherry. The first two Bulldogs to ever suit up at the event, Strome and Entwistle have played together for the better part of the last 10 years, a relationship that goes back to their minor hockey years with the Toronto Marlboros.

“I can’t remember the last time I played against him to be honest,” Strome reflected. “I’ll be sure to send him a few texts before the game and get in his grill about it.”

Ultra-competitive Windsor Spitfires teammates Gabriel Vilardi and Michael DiPietro are in a similar situation and have already started to size each other up. Vilardi will skate for Team Cherry while DiPietro will tend the crease for Team Orr.

“Whoever loses this one isn’t going to live it down,” said DiPietro on Sunday. “We’ve been talking this one up for awhile and we’ve both been looking forward to it. We’ve played together on Team Ontario and at Ivan Hlinka camp as well, so this will be a change for us both.”

Vilardi was of a similar attitude, not divulging much in the way of information in terms of his approach on a potential scoring opportunity. “That’s for me to know and for him to find out,” he said of his approach if given the time and space to make a move on DiPietro.

Teammates in the Soo Greyhounds tandem of Morgan Frost and Conor Timmins as well as Kingston Frontenacs defenders Jacob Paquette and Eemeli Rasanen won’t be split up tonight as they look to tackle Team Cherry together and extend Team Orr’s winning streak at the event to seven straight years dating back to 2011.

Tonight’s game begins at 7:00pm ET and can be seen live across the country on Sportsnet and in the United States on NHL Network.