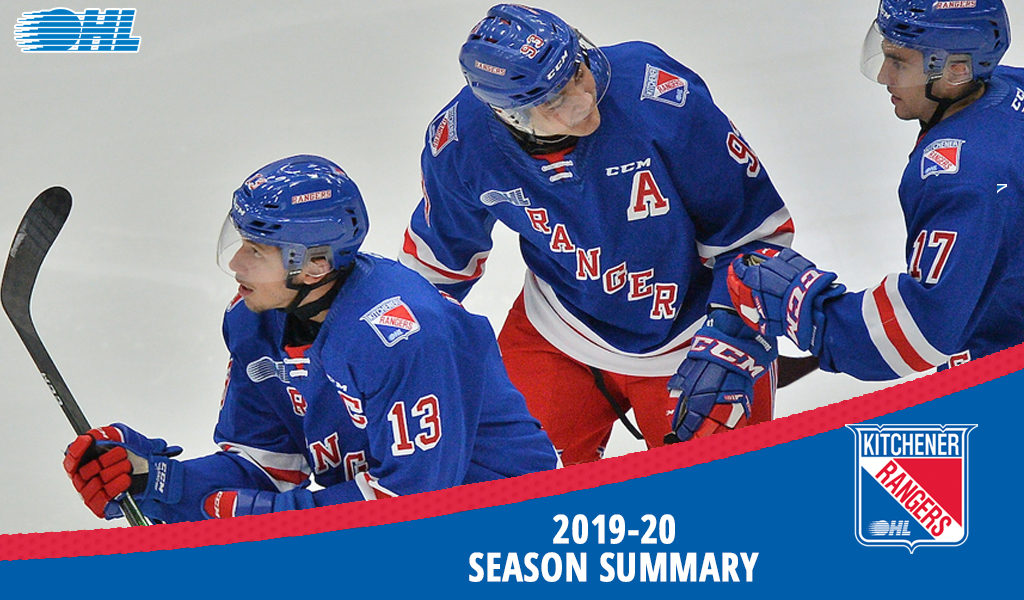 Solid goaltending, an established veteran presence, a wealth of new talent, and a system that works – the Kitchener Rangers had all the right pieces for a winning 2019-2020 campaign, even if that isn’t the way their season started out.

The reset
Before they were sailing around the top of the Western Conference, they were hovering at the bottom, struggling to make way in the win column. Change was needed, and it came behind the bench, essentially kickstarting a new beginning for the Rangers. While sitting dead last in the West with an injured goaltender to boot, the club was able to turn it all around and hit the ground running with a 10-game win streak that turned into an incredible 33-6-3-0 stretch stemming from Nov. 28, when Mike McKenzie stepped in behind the bench. With a record like that, it’s no surprise they’d often trade places with the London Knights for first in the conference and ultimately finish second in the Midwest Division at an honourable 40-16-5-2.

The McKenzie system
At last place in the West, something had to give, and on the surface, a coaching shift in late November flipped a much-needed switch. At the beginning of his fourth term with the team, Jay McKee was relieved of his duties and general manager McKenzie took over, assuming both roles. With a new bench boss came a new system, and the team bought in. McKenzie’s possession-style system allowed for more play in the neutral zone and provided more opportunity for the skilled players to shine while using their speed in transition. With more possession came success, and with success came confidence. The team hit the ground running with a 5-4 shootout win over the Erie Otters and never looked back, owning a 33-6-3-0 record the rest of the way.

Ingham’s solid showing
A very key piece of the Kitchener puzzle this season was a solid goaltending performance from Jacob Ingham. Picked up in the offseason from Mississauga, Ingham posted a continuous standout performance in the Rangers’ net all year. On the ice, the Los Angeles Kings prospect led the OHL in wins (33) and saves (1,501) – the first Ranger to lead the league in victories since 2002-03 – and posted a .917 save percentage with a 2.96 goals-against average. Off the ice, his work ethic and maturity stuck out in the dressing room. A fourth year OHLer and one of the older guys, Ingham set the standard for professionalism with a passion to make a difference, something that was just as impressive as his skill. Ingham dedicated the season to promoting the importance of donating blood as a Hockey Gives Blood ambassador and raising both funds and awareness through his Jake Saves campaign, a far-reaching effort that raised roughly $26,000. While he didn’t get to wrap things up in the postseason, his efforts paid off as his year capped off with a Kings entry-level NHL contract earlier this month.

Kitchener vets chipping in
The Rangers’ explosion was an all-around team effort with nods to the squad’s veteran presence for stepping up and elevating their game. Dallas Stars prospect Riley Damiani sat atop team scoring with a strong 78-point output, while overager Jonathan Yantsis pitched a team-high 39 goals. Having put up a 97-point season the year prior, Florida Panthers pick Greg Meireles expectedly chipped in a tremendous amount with 31 goals and 65 points in 48 games, while third year skater Mike Petizian was dependable with 43 points on the year. On the back end, New Jersey Devils draftee Michael Vukojevic and NHL Draft hopeful Donovan Sebrango stepped up with 30 ticks each on the scoresheet.

Loading up on talent
The Rangers were going for it this season, and Ingham wasn’t the only acquisition to make a big splash. To compliment the well-established group that was now without fifth-year vet Joseph Garreffa, who left to fill an open overage space with the top seeded Ottawa 67’s, the Rangers loaded up with even more talent. Hot off an OHL championship with Guelph, fellow overager Liam Hawel joined the Blueshirts to round out his five-year career with a helpful 71-point production. Arizona Coyotes pick Axel Bergkvist settled in nicely during his first year on the Kitchener blueline, chipping in with a respectable 52 points, and deadline pickup Serron Noel, also a Panthers prospect, came with an added level of depth. Rookies Francesco Pinelli and Declan McDonnell also saw the scoresheet a good amount; a good feeler for the not-so-distant future.