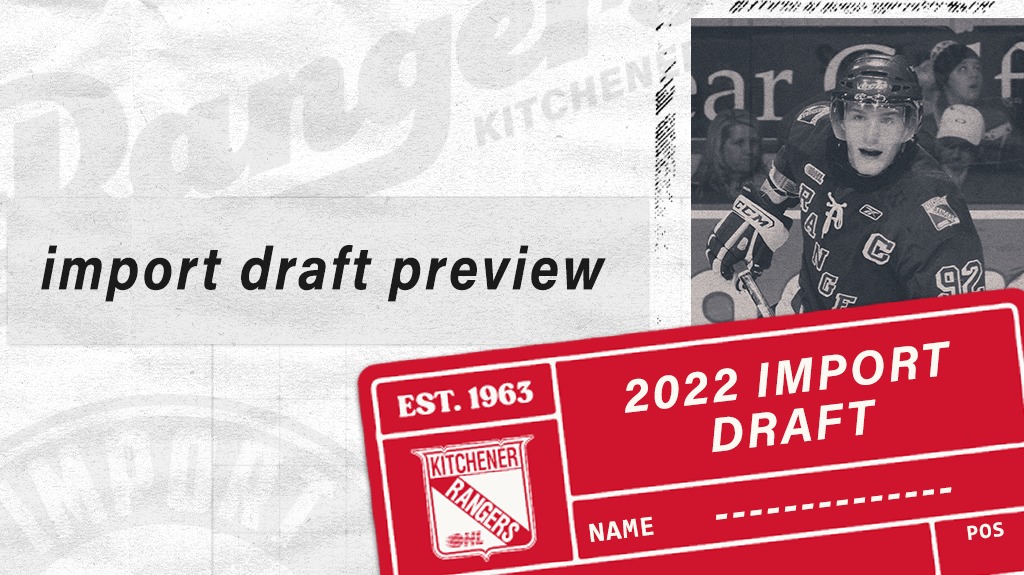 Kitchener, Ont. – The Kitchener Rangers will participate in the 31st annual CHL Import Draft this Friday, Jul. 1 at 11 a.m. (ET).

Through the CHL Import Draft, each team in the CHL is permitted to dress and play a maximum of two import players each season. The Rangers have protected goaltender Pavel Čajan on the “Overage Import List” and forward Filip Mešár on the “Special Import List.”

Last season, the Rangers selected Slovakian forward Filip Mešár with the ninth-overall selection and Swedish defenceman Calle Odelius with the 114th-overall pick. Both are expected to be selected in the first or second round of the upcoming NHL Draft this Jul. 7-8.

The two-round draft will take place online with the order of selection rotating through each of the CHL’s three leagues using an inverse order of final regular-season standings within each league from the 2021-22 season. The Western Hockey League’s (WHL) Medicine Hat Tigers hold the number one pick, followed by the Ontario Hockey League’s (OHL) Saginaw Spirit at number two and the Quebec Major Junior Hockey League’s (QMJHL) Cape Breton Eagles who will select third overall.

The import draft is seen as a way to raise the level of competition in the CHL, as well as to broaden its fan base while retaining high North American content. Last season, the import draft saw 85 players selected consisting of 52 forwards, 26 defencemen, and seven goaltenders, representing 16 different countries.

Russian and Belarusian players will be ineligible for selection in the 2022 CHL Import Draft. This does not include those players who are currently on a CHL team-protected list.

3:24
Rangers' Bienkowski recognized with the Bill Long Award
19 hours ago