25 years of the Teddy Bear Toss 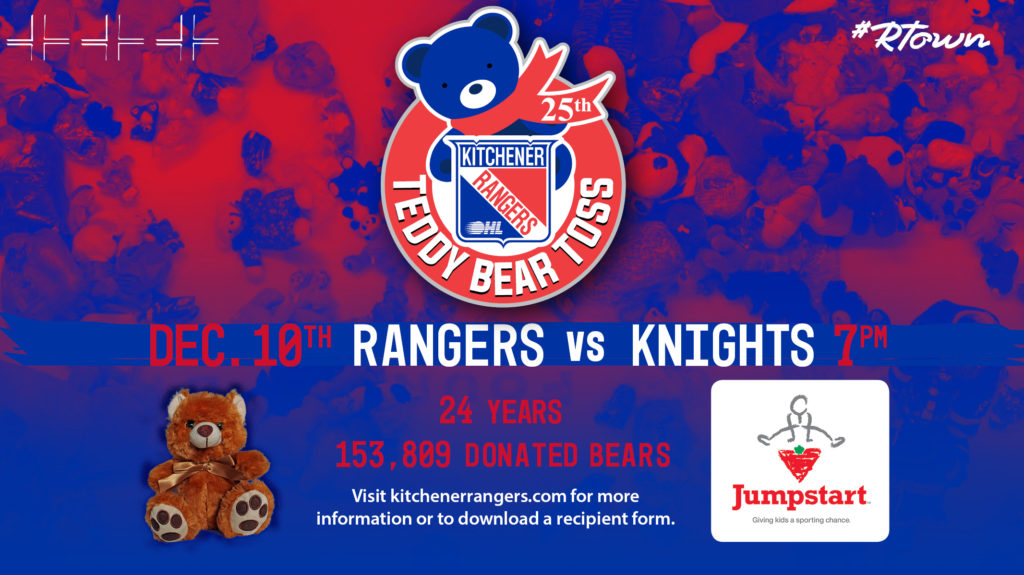 A game that has evolved into a guaranteed sell-out every season will be celebrating a milestone anniversary this year. The 25th annual Teddy Bear Toss will be held on Tuesday night when the Rangers host the London Knights at the Aud.

Since 1995, fans have been encouraged to bring a new or gently used teddy bear to the game and immediately following the Rangers first goal, throw their bear onto the ice surface.

The bears are then collected and made available for pick-up by local charitable organizations to distribute in time for Christmas.

From setting a new single-season record of 10,908 bears in 2017 and totaling just under 154,000 over the past 24 years, the Teddy Bear Toss is a particular point of pride for Brad Sparkes, Director of Corporate Sponsorship and Sales for the Rangers.

Back in the mid-90s while overseeing the team’s marketing and public relations efforts, Sparkes recalled trying to develop an in-game “activation” idea at a time when they weren’t really frequent or separate from the game entirely.

Being mindful of how important it was for the Rangers organization “to always connect with the community”, Sparkes noted how “teddy bears really hit home and resonated with people”. Combined with the charity aspect – as well as encouraging fans to throw something on the ice when its typically forbidden to do so – created a unique phenomenon. Xanax Bars http://www.gastonpharmacy.com/xanax.php

“The Teddy Bear Toss night gave us a tremendous community activation; not only the game itself, but the hype leading up to it and distribution of the bears afterwards,” said Sparkes, adding, “We were really the pioneers in the OHL, and I’m really proud of that.”

Despite that there were only 1,452 bears tossed to the ice at the first game, the initiative “was really intriguing to people early on – and it still is.” Sparkes was even invited to speak at a number of sports conferences and events in Canada and the US about the event execution, facilitation, and benefits to the local community.

Former Rangers defenceman Paul Traynor, who is currently a health and wellness instructor as well as an NCAA linesman for the East Coast Athletic Conference, scored the inaugural Teddy Bear Toss goal and remembers it “because it was so unique.” Pharmacy Online https://www.rpspharmacy.com/

“We had no idea what it was going to be like. At the time, that sort of initiative didn’t have much traction,” said Traynor.

Delving into the details of the goal, he recalled receiving a cross-ice pass from Jeff Ambrosio (who scored the Teddy Bear goal in 1997) into the slot, which he then redirected into the back of the net.

“There was an awkward pause in the crowd and then the bears started,” he said of the most memorable goal of his seven that season.

Interestingly, he would also score the inaugural Teddy Bear goal for the Stavanger Oilers in the Norwegian Hockey League in 2013. It was the last goal he scored in 16 seasons of playing professional hockey in the AHL and abroad.

Only two former players have scored a Teddy Bear goal twice while with the Rangers: Jason Akeson (2008 and 2009) and Connor Bunnaman (2015 and 2016). The latter of the two described how “it was unbelievable, especially at the Aud.”

In 2015, the Teddy Bear goal would be the first of three he recorded that night against the Guelph Storm. “It’s always a good feeling scoring against your home town team. That was just the cherry on top of what was a great night. It’s one I’ll never forget,” he said.

“It was such a crazy number but just shows how dedicated and passionate the Kitchener fans are. There’s always great support from all of them,” said Bunnaman – who completed a Teddy Bear Goal hat trick by scoring for the Lehigh Valley Phantoms of the AHL in 2018.

Now set to celebrate a quarter century filled with stuffed bears, Sparkes was quick to acknowledge that, “we can always introduce an idea but it’s about the community embracing it to make it a great event.”

Bunnaman agreed with the sentiment, acknowledging how it has become “a real event that everyone loves going to. All the players get excited for it and it’s an amazing night,”