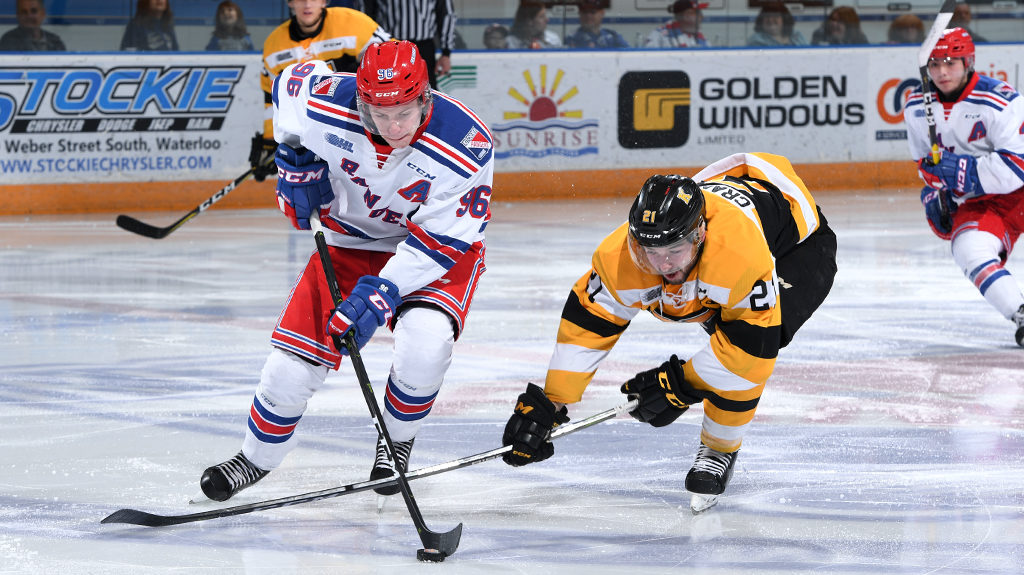 Greg Meireles extended his point streak to eight games on Rickard Hugg’s 14th goal of the season. Luke Richardson saved 21 of 24 shots in the loss.

It was a fast and relatively quiet opening period as the only two players to make it on the score sheet were Justin MacPherson for a holding penalty at 13:16 and Matt Hotchkiss for a hooking penalty at 17:41.

The Frontenacs Jayde Wilson opened up the scoring at 14:06 of the second period after the puck was battered around the crease of Luke Richardson. His second goal of the season made it 1-0 Kingston.

Moments before the end of the period, at 19:42, Brett Neumann extended the Frontenacs lead on a wrist shot over the shoulder of Richardson to make it 2-0.

The Rangers ended the period still up in shots 23-20.

A Jakob Brahaney hooking penalty at 5:45 of the third period sent Kitchener to the powerplay for the second time on the afternoon. On the ensuing powerplay, at 6:42, Greg Meireles found Rickard Hugg who wired home his 14th to cut Kingston’s lead in half, 2-1.

The assist extended Meireles’ consecutive games with a point streak to eight games.

The Frontenacs restored their two-goal lead at 13:26 when Richardson was scrambling back to his crease after attempting to clear the puck from behind the net. Neumann had the puck end up on his stick and made good on the opportunity to score his second goal of the afternoon. It was 3-1.