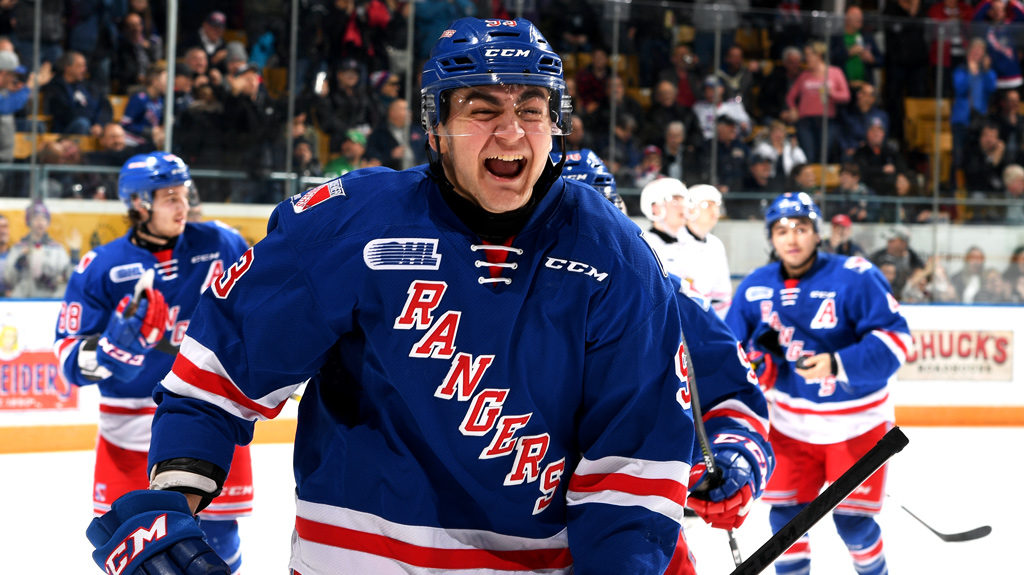 The night was all about Jonathan Yantsis who scored four goals to reach the 50-goal milestone for the season and became the first Rangers player since Jeff Skinner in 2009-10, and the 15th Ranger all-time, to do so.

Alexey Lipanov scored two goals, Riley Damiani scored one goal and two assists to reach 30 goals on the season, and Rickard Hugg had three assists in the win. Greg Meireles and Joseph Garreffa each earned points to extend their points streak to 19 and 14 games respectively.

Luke Richardson stopped in 27 the win.

It took just 17 seconds to see a goal on Friday night as Dylan Groulx scored his 17th goal of the season when he picked up his own rebound off a Luke Richardson save and slid it by the Rangers netminder to make it 1-0.

Owen Sound extended their lead at 2:22 when Maksim Sushko danced the puck around a sprawled-out Richardson to make it 2-0 for the visitors.

The Rangers struck back when the Attack turned the puck over in the neutral zone that led to Jonathan Yantsis firing a puck on net from just inside the blue line that resulted in a big rebound onto the stick of Riley Damiani who fired home his 30th goal of the season to cut the lead in half, 2-1.

At 6:07 Sushko took a cross-checking penalty that gave the blueshirts their first powerplay of the game.

On the powerplay, some terrific passing by Kitchener led to a goal for Yantsis, his 47th, on assists from Damiani and Rickard Hugg and that tied the game up, 2-2.

The period would end with the score deadlocked at two and the Attack slightly outshooting the Rangers, 15-13.

Kitchener took their first lead of the game on their fifth powerplay. Sushko received an interference penalty at 5:14 that led to the second powerplay goal of the game for the Rangers, this time by Greg Meireles, to make it 3-2.

Damiani and Joseph Garreffa assisted on Meireles’ 35th goal of the season.

The points for Meireles and Garreffa extended their points streaks to 19 and 14 games respectively.

At 12:08, Trenton Bourque took a five-minute major penalty and a game misconduct for a cross-check on Alexey Lipanov.

Kitchener capitalized in a huge way with the advantage scoring four times including two from Yantsis and one each from Reid Valade and Lipanov to make it 8-2.

With 27 seconds left in the period, Lipanov scored his second of the game to put the Rangers ahead 9-2.

Shots on goal heading into the third period were in favour of the Rangers, 34-23.

The score would remain the same for the remainder of the final period.

The Rangers outshot the Attack 42-30

The Rangers close out the regular season in Owen Sound tomorrow, game time is 7:30 pm. They return home to round one OHL playoff action vs the Guelph Storm on Tuesday, March 26 at 7 pm for game three of the Western Conference Quarter Final. Click here for a complete schedule of games.