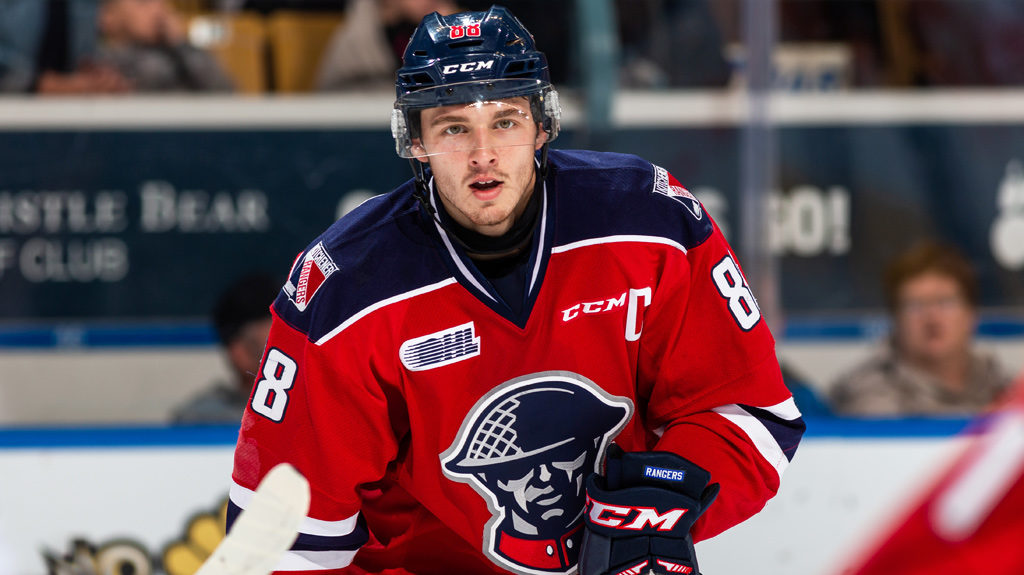 Kitchener, ON: The Rangers (7-8-2-2) played host to their Midwest division rivals, the Guelph Storm (12-4-1-2), who came into the night riding an eight-game winning streak.

Riley Damiani was the lone goal-scorer for the Rangers in a game that saw the Storm score three third period goals to win the contest 5-1.

Lucas Pfeil stopped 20 in the loss.

Cam Hillis (8) opened the scoring for the Storm at 12:37 when Pavel Gogolev went around the back of Lucas Pfeil’s net before dishing in front to Guelph’s captain. It was 1-0.

The first period wouldn’t see any more action on the scoreboard. After 20 minutes, the Rangers led in shots, 8-5.

At 6:45 of the second period, Gogolev took a tripping penalty, Guelph’s third penalty of the game at that point. On the power-play, after a flurry of opportunities, Greg Meireles passed in front of the net to Jonathan Yantsis who then executed a perfect backhand pass to Riley Damiani who rifled home his ninth of the season to tie it up 1-1 at 8:17.

As time wound down in the second period, the Storm were mounting pressure in the Rangers’ end. A shot from just in front of the blueline by Josh Wainman (4) went through traffic and beat Pfeil with 1.3 seconds remaining to make it 2-1.

Fedor Gordeev brought down Yantsis and took a holding penalty at 8:55. On the power-play, a turnover led to Cedric Ralph (12) getting a partial breakaway on Pfeil and the centreman capitalized while shorthanded to make it 3-1.

Keegan Stevenson (9) added another for the Storm at 15:18 while they were on the power-play. Stevenson tipped a shot by Gogolev into the net and that made it 4-1.

Gogolev capped off his three-point night at 17:29 when he beat Pfeil high, glove-side to make it 5-1 for the visitors.