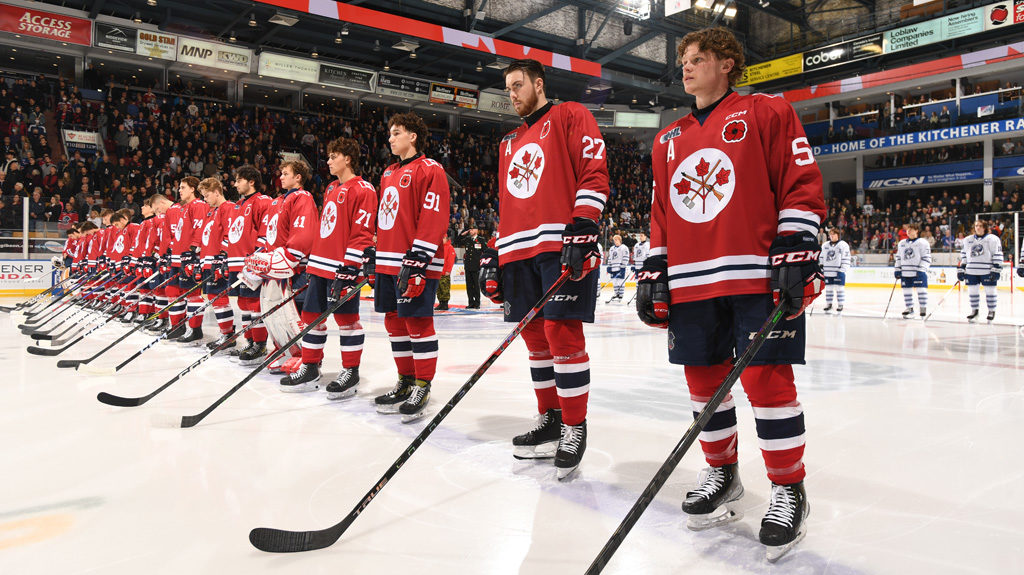 Kitchener, Ont. – Jesse Fishman scored the lone goal for the Rangers, Kitchener-native Kyle Morey recorded his first-career OHL point and Marco Costantini made 24 saves on 27 shots in a 4-1 defeat to the Mississauga Steelheads Friday before a 17th-annual Remembrance Day crowd of 6,460 fans at the Kitchener Memorial Auditorium Friday.

After multiple close opportunities for the Rangers to convert in the opening frame, Mississauga was first to strike late in the first period. At 15:14 James Hardie potted his seventh goal of the season. A turnover on the right hashmarks allowed Hardie to collect the puck while two teammates went hard to the net. As the defenders collapsed to cover the pass, he snapped a shot through the legs of Marco Costantini.

The first period ended with the Steelheads ahead 1-0 but the Rangers leading in shots 11-10.

It was a mirror image of the opening frame in the middle 20 minutes. Mississauga scored the only goal in the period, doubling their advantage on the Rangers to 2-0. This time at 9:51 James Hardie fed a puck from the top of the circle down to the bottom of the circle to Luca DelBelBelluz (Columbus Blue Jackets). Hardie drove hard to the far post for DelBelBelluz to feed him with a cross-crease pass, one-timing the puck past the glove of Marco Costantini. His second goal of the game put Mississauga up 2-0 after 40 minutes of play and shots favoured the Steelheads 18-15.

Kitchener made it a game scoring early in the final period. Jesse Fishman scored his second goal in as many games to cut the lead in half at 2:09. Kitchener-native Kyle Morey collected the puck on the half-wall to create a 2-on-1 with Fishman. Morey slid the puck over to Fishman who scored through the legs of Alessio Beglieri. Mississauga responded mid-way through the third period to extend their lead back to two goals. Finn Harding was the trailer on a 3-on-2 break and wired a puck from the high slot into the top-right corner. With the goalie pulled and Kitchener pressing for a goal, James Hardie found the empty net from the red-line to complete his hat-trick with 16 seconds left in the game. Mississauga took the game by a score of 4-1 and shots ended even at 28 a piece.

Neither team took a penalty on the night. Matthew Sop earned the game’s third star, with the first and second star going to members of the Mississauga Steelheads.

Next up, the Rangers will continue their three-games-in-three days weekend when the club travels to Sudbury for a Saturday night contest at 7 p.m. before facing-off in North Bay Sunday at 2 p.m. Both games will be televised live throughout Kitchener and the Waterloo Region on Rogers TV, cable channel 20, and can be heard live on the radio on CityNews 570 AM CKGL.