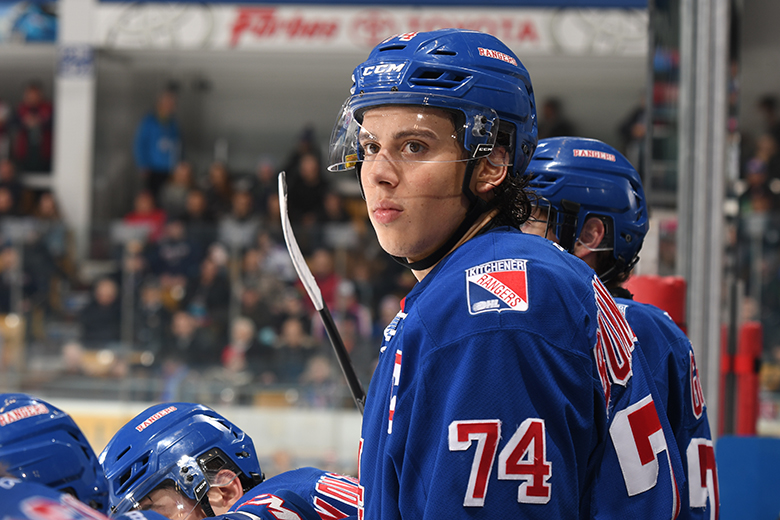 It was the second time in six days that the two teams faced off, the Rangers claiming a 3-2 win over the 67’s in Ottawa on Family Day.

The Rangers remain marred by the injury and flu bug, but did see the return of imports Rickard Hugg and Adam Liška, as well as Logan Brown and Connor Hall to the lineup.

Sunday also marked the return of former Ranger Jacob Cascagnette to East Ave for the first time since being traded to the Mississauga Steelheads last January. He would tally a goal and an assist for the 67’s in the win.

Givani Smith and Connor Bunnaman each scored power play goals in a losing effort for the Rangers, who saw a modest two-game win streak snapped.

A power play goal by Smith opened the game’s scoring at 4:48 of the first period, giving the Rangers a 1-0 lead from Logan Brown and Logan Stanley.

Just under three minutes later the game was tied, as Mitchell Hoelscher made it 1-1, from Tye Felhaber at 7:39.

Felhaber would tally a power play goal of his own to give the 67’s their first lead, 2-1, at 10:53 from Graeme Clarke and Cascagnette.

Before the period was out it was once again a tie game as Kole Sherwood found Bunnaman with a beautiful pass, sending the game into the first intermission tied 2-2. Joseph Garreffa earned the second assist on the power play goal, which came at 13:30.

After the first period of play shots favoured Kitchener, 12-10.

The lone goal of the second period belonged to the visitors, as Kody Clark scored the game’s third power play marker to give the 67’s a 3-2 lead, from Noel Hofenmayer and Sasha Chmelevski at 16:12.

The Blueshirts led the shot clock 20-16 through 40 minutes of play.

The game remained 3-2 when the clock read 1:30 remaining and the Rangers pulled Culina in favour of an extra attacker. Instead of being able to tie things up, however, the 67’s potted a pair of empty netters; one by Clark at 18:59, the other by Cascagnette at 19:41 to seal the 5-2 win for the visitors.

The Rangers continue their home stretch on Tuesday night when they take on the Sarnia Sting at 7pm in a make-up game from February 9 which was postponed due to weather. Fans with game tickets and Rangers Express tickets for February 9 will be accepted upon entry on Tuesday.