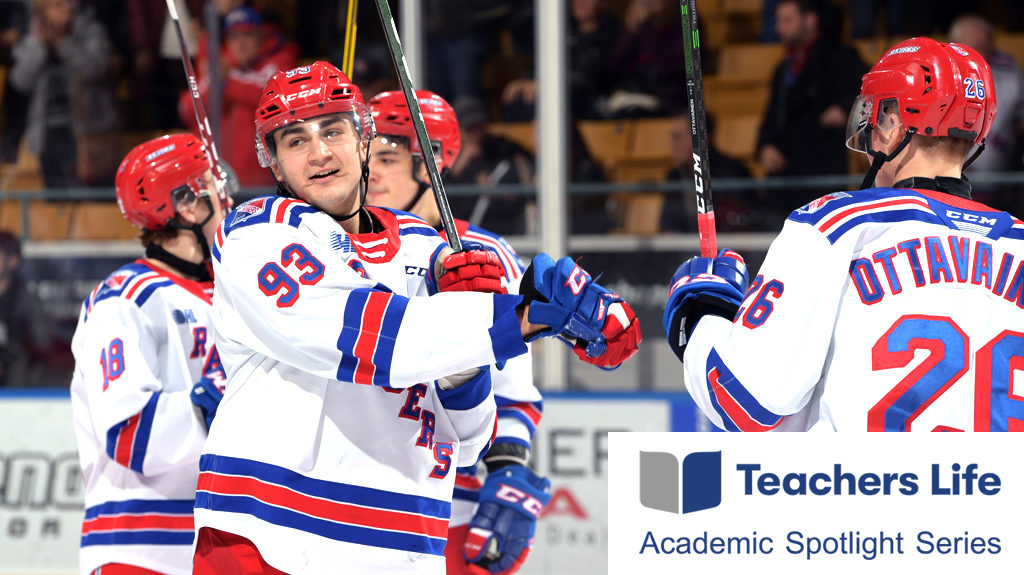 Jonathan Yantsis recently completed a four-year OHL career that saw him begin as an undrafted free agent signing ahead of the 2016-17 season. He would go on to amass 97 goals, 52 assists, and 149 points over 214 career regular-season games, highlighted by a 50-goal season in 2018-19. He also collected 10 points (8-2-10) over 28 career playoff outings.

Now, he plays for the Queen’s University Gaels men’s hockey program while completing an economics degree at the university. Yantsis says, “my goal is to get an economics degree and write my LSATS next summer, and then hopefully start working with sports teams.” He goes on to say that he would like to be “dealing with contract negotiations with players, or something along those lines. I would love to stay involved in sport.”

Education has always been a priority for Jonathan. He has won the Channer’s Men’s Apparel Outstanding Player Award three times during his career with the Rangers. This award acknowledges a player who encompasses strong play on the ice, gives back to our community and aims to better himself with education. Jonathan has also won the Robin’s Goldsmithing Academic Achievement Award three times.

Reflecting on his time with the organization and the educational opportunities in the league, he says that “it was definitely a great help, the ability to choose your school. Many of the programs set up (with the Rangers) will help you get into the programs you want. The OHL helped develop time management skills, that’s been huge in university. The adjustment has been easier, going from playing junior hockey there to playing on the men’s team here.”

“Teachers Life are proud sponsors of the OHL’s Academic Spotlight Program,” says Doug Baker, President and CEO of Teachers Life. “The dedication of the OHL’s student-athletes to their education mirrors Teachers Life’s commitment to students and educators across the province. By celebrating these athletes, they become role models to kids in their communities through their dedication to academic excellence, integrity and curiosity.”

Balancing school and hockey can be challenging, but Jonathan says he has learned “skills like time management” through playing in the OHL, “if you were on the road and enrolled in classes, you would have to schedule your time to find areas to do work.”

Another Rangers alumnus and former teammate of Jonathan, Luke Richardson, is continuing his education at Queens University, and the two are continuing their close friendship by living together in Kingston. Jonathan may not be helping Luke with studying, though, and he laughs that he “has an eight-page history essay due next week.”

Yantsis leaves with some advice for young players who may have just started playing in the OHL. “Take advantage of the opportunities and the resources around you, get ahead of that side of your life. Just enjoy, get into the school because it helps take your mind off of the game.”