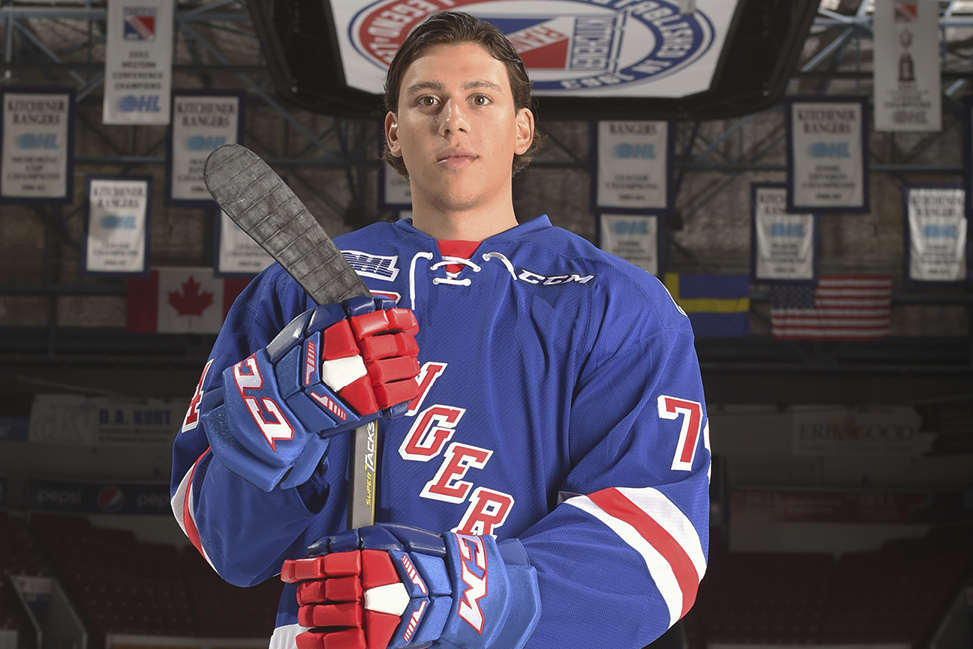 The 19-year-old, Guelph, ON native tallied a pair of goals – including the game winner in the third period – and added an assist as the Rangers improved to 7-3-1-0 on the season with a 5-3 win over the Flint Firebirds (5-3-1-0) in front of 1,913 fans at the Dort Federal Event Center.

It capped off a successful road weekend of three games in three days for the Blueshirts who, despite falling 3-2 in a closely contested meeting with the Sault Ste. Marie Greyhounds on Friday night, rebounded nicely with a come-from-behind win over the Saginaw Spirit last night, followed by outlasting the Firebirds this afternoon.

The Rangers captured four of a possible six points and remain atop the Midwest Division standings, second overall in the western conference with 15 points.

For Bunnaman, he started the weekend by scoring his first goal of the season and finished it with seven points (5G, 2A) in three games.

Anthony Dumont-Bouchard (6-1-0-0) returned to the crease for Kitchener after Luke Richardson earned his first win of the season in last night’s second of the three-in-three weekend. Dumont-Bouchard turned aside 30 of 33 shots en route to the victory.

Luke Cavallin (0-2-0-0) still searches for his first Ontario Hockey League win as the rookie netminder was faced with a barrage of Kitchener shots on Sunday. He faced 43 shots in total, turning aside 38 while surrendering five in the loss.

Kitchener’s 43 shots on goal set a new season high, outdoing their previous mark of 36 set on September 29th versus the Owen Sound Attack.

After a scoreless first period, it was Adam Mascherin who gave the Rangers their first lead of the game early in the second period. Mascherin pounced on a rebound in front of the Flint goal at 2:12, with the assists to Joseph Garreffa and Riley Damiani.

Maurizio Colella notched his first of the game to tie things up at 1-1, his fifth of the season from Ryan Moore and Nicholas Caamano at 13:03.

Just under three minutes later the Rangers would take back the lead, as Nick McHugh registered his second of the season at 15:52, from Bunnaman and Jonathan Yantsis.

Leading 2-1 on the scoresheet heading into the second intermission Kitchener also led on the shot clock, outshooting the host Firebirds 14-13 in the opening frame and 17-9 in the second for a two-period total of 31-21.

Before the third period was a minute old the game was once again tied, as Moore banked his third of the season, from Caamano, to make it a 2-2 game at the 46 second mark.

Bunnaman’s first of the game and fourth of the season came just over four minutes into the period, giving the Rangers their third lead of the game, 3-2, assisted by Jake Henderson and Giovanni Vallati.

Kitchener looked poised to extend that lead with a power play opportunity awarded at 7:16, but instead it was the Firebirds who capitalized with a shorthanded marker on the stick of Colella, his second goal of the game, from Ty Dellandrea at 8:17.

But Bunnaman would answer back for his club, giving the Rangers their fourth and final lead of the night at 12:34, from Henderson and Rickard Hugg to put Kitchener in front, 4-3.

Greg Meireles would bury his third goal of the season to secure the 5-3 win for the visitors, with Adam Liška and Cole Carter earning the helpers just 28 seconds later at 13:02.

The Rangers would finish the game 0-for-3 on the power play, while the Firebirds went 0-for-2 with the man advantage.

Stanley, Mascherin, and Henderson each wore an “A” and skated as alternates to Rangers’ captain Bunnaman.

The Rangers are back on home ice at The Aud on Friday, October 20th when they host the London Knights at 7:30pm.