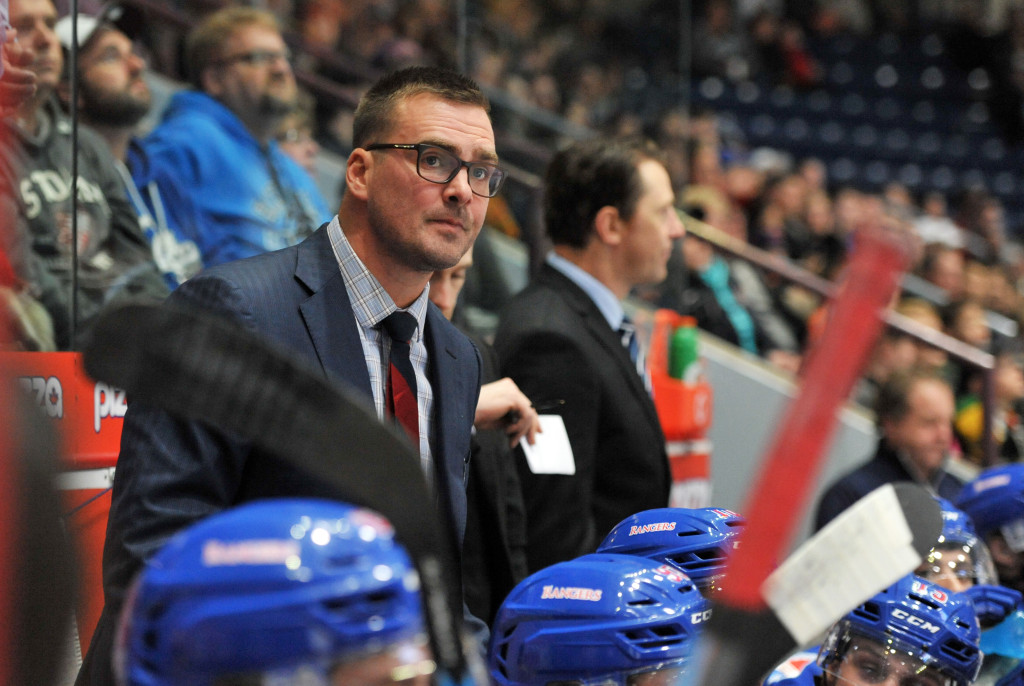 There were a lot of changes in the offseason for the Kitchener Rangers. Players graduated, and prospects were drafted. New names were signed, and trades were made. But for a team who, by their own standards, hasn’t measured up to the bar of success to which they are accustomed for the last few seasons, another big change was deemed necessary – this time behind the bench.

Enter new Rangers head coach Mike Van Ryn. Although he’s a familiar face to the players and the fans, his expanded role is met with hopes of a new beginning and a better overall outcome for the 2015-16 season.

The former first round draft pick of the New Jersey Devils in 1998 has been steadily building his coaching resume over the last five seasons, breaking the ice as an assistant in Niagara for the IceDogs in 2010, then moving on to the AHL affiliate of the Minnesota Wild, the Houston Aeros, from 2011-2013.

He came on board as an associate coach with the Rangers the following season, and is now ready to take the reigns as bench boss at The Aud. The 36-year-old Van Ryn thinks the transition from associate to head coach should be a relatively simple one, especially considering the rest of his staff.

“On a personal level nothing will change,” stated Van Ryn. “I believe in having a relationship with your players and knowing them as individuals. The biggest difference in my role now is just having more of a say in the ‘x’s and o’s’ of the game. I’ll be getting tons of ideas from everybody in the organization and soaking in those ideas, but at the end of the day I’ll be having the final word and final stamp on how things are done.”

The input from assistant coach/assistant GM Mike McKenzie, assistant coach Daniel Tkaczuk and associate coach Jay McKee will allow the game to be seen from multiple perspectives. Van Ryn knows it’s an opportunity to capitalize, seeing as how the latter two were also first round picks in the NHL.

“Everybody sees the game a little different. We’ve got a guy that was a pure defensive specialist [McKee], a guy that was more of an offensive guy [Tkaczuk], and myself. I was a bit of a two-way guy.

“You get to see the vision and get to collaborate on how we all see the game because we’re constantly talking on the bench,” he elaborates. “I get to have guys around me who have experience not only playing, but as coaches too.”

Van Ryn and his staff will have plenty to put their heads together about as they come off a season which saw the Rangers finish sixth in the western conference with a 32-26-3-7 record and finish last in their division for the second straight year.

Overall though, there are positives from the growing pains the team has recently experienced, one of them being the fact that a large core of young players got the opportunity and ice time to develop their game at a quicker pace.

“The game plan all along was to try to get these guys experience but maybe, to a degree, sometimes it worked backwards. Guys got put into situations that maybe they weren’t necessarily ready for at the time, but in the end we had to put them in those situations because of the roster we had.

“But that’s junior hockey, and I believe we’re further ahead today because of it. Ultimately we’ve got chances to make even bigger strides now, and all that does is make us a better hockey team.”

Although the team endured its share of struggles it also showed some resilience, as they kept themselves in games and picked up valuable points by taking games beyond regulation. A lofty 29 out of 68 (43%) of their regular season games were one-goal games, and their ten games decided in overtime or a shootout were the second most by any team in the OHL.

Van Ryn believes that tenacity, combined with the addition of some key pieces in the offseason, will make his team a tough one to face.

“Luke Opilka is a guy that has all kinds of international experience, a guy that has played well in some pretty big games, and a guy that’s well respected. If you talk to his teammates in the US Development Program everyone believes this kid is a phenomenal goaltender, and it’s just proven by the fact that he was rewarded with a contract by the St. Louis Blues in early July.

“We feel we have a special player in him, somebody who will provide us some stability in goal and will allow us to take a few more chances offensively because we’ve got somebody like him behind us.”
Brian Brosnan is another new addition and will claim one of the team’s overage spots this year, but he’s not the only one Van Ryn thinks he’ll see good things from.

“Brosnan is a kid that can bring us a bit more offence to our lineup, but can also provide a defensive shut-down role for us, too. Sticking on the backend, I think a guy like Frank Hora has been coming along steadily throughout his career, and I expect that to stay the same.

“I think a guy that will surprise most people and have a big year is Doug Blaisdell. I hate putting too much pressure on players because I know often times they do a good enough job of that themselves, especially in their NHL draft year. I think Doug might have done that. I hope he comes into this year and he just plays his game, gets rid of any unnecessary pressure on himself, and just proves to people he should have been drafted.”

As a group Van Ryn says he could say something about each and every one of his players but overall he thinks the squad will be well prepared and ready for the year ahead.

“It’s a tough division, first and foremost. There are teams that recruit very well, but I think we’ve had a pretty good offseason this year and we’re right there. I think depth wise, we may even be looking better than a few of the other teams.

“But I don’t like to get too far ahead of myself. We’ve just got to see how the work was handled in the summer by our players and how we can piece it all together as a staff.”

One thing he hopes he won’t have to work on with his players is their stellar play at home. Last season the team was impressive at The Aud, winning 23 of 34 home games, picking up at least a point in every game but seven. They enjoyed a nine-game home win streak at one point, and lost back-to-back games on East Avenue just twice all season.

He, like the players, want to reward those faithful fans of Rangers Nation. In fact, it’s one of the things that need to happen if Van Ryn will deem this season a success in his mind.

“I think for me to consider this season a success, first of all we need to provide our fans with an exciting brand of hockey. Also, I’d like us to be a team that can score more goals. But the main thing is to go a little deeper in the playoffs.

“If we can establish our team as one of the elite, one of the powerhouses in the CHL, and get back to where we were and that winning attitude, I’ll consider this season a success. It’s kind of a long term goal, but not entirely. Point blank, the goal is to create that winning culture and that winning feeling around the organization again.”