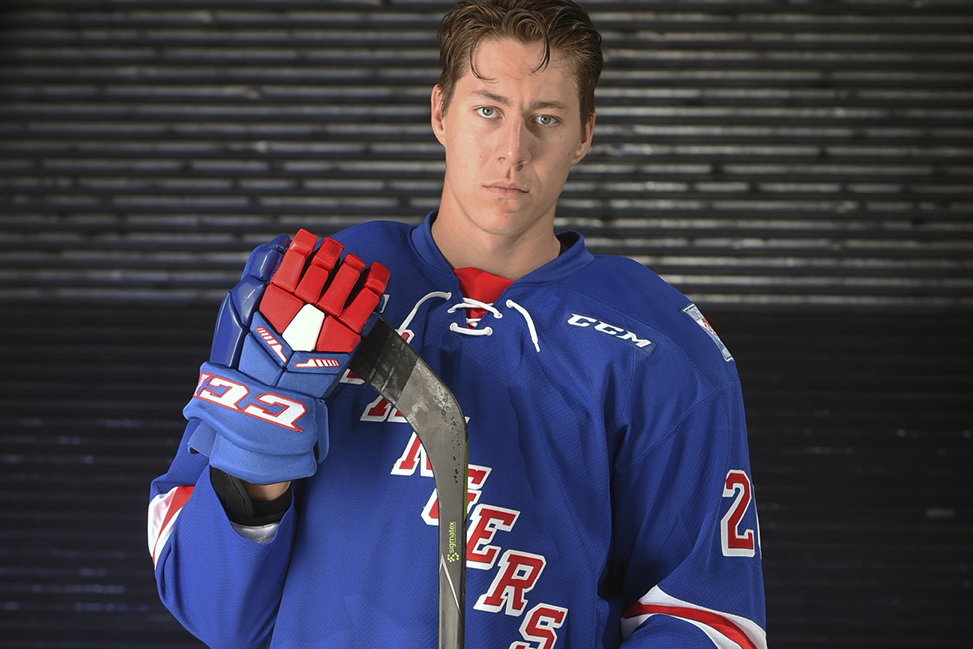 You couldn’t have drawn up a much better return to Windsor for Logan Stanley.

The 6’7.5” defenceman scored a third period goal and assisted on the game winner as the Kitchener Rangers (2-1-0-0) handed the Windsor Spitfires (3-1-0-0) their first loss of the season, 4-2, in front of an announced crowd of 3,990 at the WFCU Centre on Thursday night.

After more than 200 regular season and playoff games plus a MasterCard Memorial Cup championship as a member of the Spitfires, Stanley’s first game with the Kitchener Rangers was one to remember. Even before the rugged blueliner etched the scoresheet with a goal and an assist the Spits graciously acknowledged the return of ‘Big Stan’ to their arena with a pregame ceremony, complete with a reunion with junior hockey’s most coveted trophy.

Stanley’s impact on the all-around impressive road performance by the Rangers wasn’t lost on bench boss Jay McKee following the game, as he told 570 News.

“I think he has a real ripple effect,” said McKee on the play of Stanley in his debut. “Not just what he brings to the lineup, but what that means to our whole defence. He brings a lot individually, but we really benefit as a team in what he brings to our Club.”

For the second straight game Kitchener got a quality start from goaltender Anthony Dumont-Bouchard (2-0-0-0). The Lėvis, QC product once again came up with timely, quality saves – 21 in total – to backstop the Blueshirts to the win.

His counterpart, Michael DiPietro (3-1-0-0), took the loss in goal for the hosts, surrendering four goals on 24 shots.

The Rangers received a rounded offensive effort as four different goal scorers helped surge the team to victory, including Nick McHugh (1G, 1A), Jake Henderson and rookie defenceman Jack York, who scored the first of his Ontario Hockey League career.

A pair of unconventional goals started off the game in the opening handful of minutes and it began with the Spitfires, as Luke Boka was credited with giving Windsor a 1-0 lead.

Boka directed the puck towards the Kitchener net, which then deflected past Dumont-Bouchard just 32 seconds into the opening frame. Austin McEneny picked up the lone assist.

The Rangers would answer back quickly however, as a wrap-around attempt by McHugh found its way past DiPietro to tie the game, 1-1, from Mike Petizian and Kyle Gentles at 2:55.

With just over five minutes to play in the period it was York who registered his first OHL goal on a pretty wrist shot that went top corner far-side, giving the Rangers a 2-1 lead heading into the first intermission from Adam Mascherin and Giovanni Vallati at 14:48.

Shots on goal in the first period of play favoured Kitchener, 14-9.

The Spitfires got an early power play opportunity to start the second period and they capitalized just six seconds into the man advantage, as Aaron Luchuk evened the score, 2-2, from Jake Smith and McEneny at 1:13.

Near the midway point of the period the Rangers regained the lead, as Henderson tallied his first of the season to make it a 3-2 game. The lone assist on the eventual game winner went to Stanley, his first point against his former club, at 9:39 of the middle frame.

After the teams traded goals in the second period the game headed to the second intermission with shots tied, 20-20.

As the third period began it was Kitchener’s turn to etch the scoresheet quickly, as Stanley buried his first goal as a member of the Rangers against his former club. After a nifty, backhand feed from Riley Damiani, Stanley pounced in the slot, lifting the pick over DiPietro to give the Blueshirts some insurance with a 4-2 lead just 48 seconds into the third. McHugh picked up the secondary assist for his second point of the game.

It proved to be the lone goal of the third period as Windsor would pull DiPietro in favour of an extra attacker but to no avail, as the Blueshirts skated to their second straight road win, in turn, handing the Spitfires their first loss.

The Rangers would finish the night going 0-for-3 on the power play, while Windsor was 1-for-2 with the man advantage.

Shots on goal in the third period of play were 4-3 Kitchener, for a game total of 24-23 in favour of the visitors.

Stanley, Mascherin, and former Spitfire Cole Carter each wore an “A” and skated as alternates to captain Connor Bunnaman.

The Rangers continue their plight of three games in three nights as they return home to host the Owen Sound Attack tomorrow night, Friday, September 29th at 7:30pm. They close out the weekend back on the road when they visit the Erie Otters for a 7pm start on Saturday, September 30th.