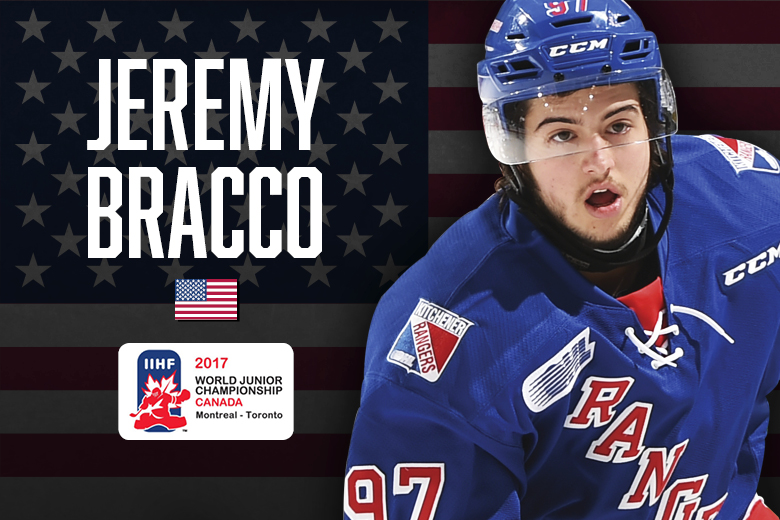 Jeremy Bracco notched an assist in regulation and scored in the shootout to help propel Team USA to a 4-3 win over Team Russia in semi-final action at the 2017 IIHF World Junior Championship on Wednesday.

Troy Terry (Highlands Ranch, Colo./University of Denver) netted three shootout goals, including the game-winner in the seventh round of the shootout. Team USA will play in the gold medal-game Thursday at the Bell Centre in Montreal against Canada. Puck drop is set for 8pm ET.

“I’m so happy for our guys and the fight that they showed here tonight,” said Bob Motzko (St. Cloud, Minn./St. Cloud State University), head coach of the 2017 U.S. National Junior Team. “That was a tremendous game to be a part of. We’ll enjoy this for a little, but our guys know the mission isn’t over. It’s exciting to know we have a chance at the gold medal tomorrow.”

Denis Guryanov gave Russia a 2-1 lead just 1:17 into the second stanza when he found a rebound off an initial save from Parsons.

After Parsons made a pair of point-blank stops to keep it a one-goal contest, Team USA tied the game on a power play goal by captain Luke Kunin (Chesterfield, Mich./University of Wisconsin) with 9:37 left in the stanza. The play started when Jordan Greenway (Canton, N.Y./Boston University) fired a pass in front of the net for Kunin, who redirected the puck just below the crossbar for the score.

White’s second goal of the game with 3:39 left in the middle frame gave the U.S. its first lead of the game. White took a shot from the left faceoff dot that deflected off a Russian defender and past Samsonov for his team-leading sixth goal of the tournament.

The U.S. nearly extended its lead when Keller was awarded a penalty shot with 14:46 to play, but his backhand attempt was gloved by Samsonov. Just 50 seconds later, Guryanov evened the score for Russia when he tallied on a breakaway.

Both teams traded chances, but neither could net the game-winner in the final 13:56 of regulation and through ten minutes of four-on-four overtime action.

Team USA’s two best chances in the extra frame came from Joey Anderson (Roseville, Minn./University of Minnesota-Duluth). Moments after he rang a shot from the top of the right circle off the crossbar, a loose puck in front of goal landed on his stick but Samsonov was there to make the save.

In the initial five-round shootout, both Terry and Jeremy Bracco (Freeport, N.Y./Kitchener Rangers) scored while Parsons made three saves to keep the shootout score tied, 2-2. In the extra rounds, Parsons made two saves and Terry scored twice to secure the win.

Parsons finished with 33 saves to earn his fourth victory of the tournament.

NOTES: Tyler Parsons was named U.S. Player of the Game … Team USA outshot Russia, 44-36 while finishing 1-for-4 on the power play and 1-for-1 on the penalty kill … For full game stats, click here.