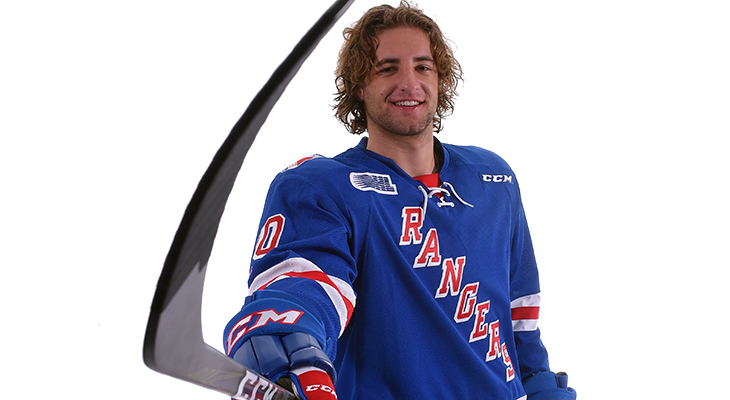 It went down to the wire, but Jeremy Bracco’s season-long point streak continued in exciting fashion on Friday night at the Aud.

The goal was the 51st point of the season for Bracco (17G, 34A), and extends his season-long point streak to 26 games.

Dawson Carty, who was named the game’s Third Star, earned the win in goal for the Rangers, improving to 13-4-1-1 after making an impressive 40 saves on 42 shots.

His counterpart Jeremy Helvig (12-9-2-1) took the loss in the Kingston goal, surrendering three goals on 29 shots.

It was also an impact night for Jake Henderson, who scored his first goal on home ice this season and was named the game’s First Star.

Jacob Cascagnette was the other Rangers goal scorer on the night, tallying a highlight reel snipe which tied the game 2-2 in the second period and eventually forced overtime.

Jason Robertson’s 12th of the season, from Ted Nichol and Warren Foegele, gave the Frontenacs a 1-0 lead just 13 seconds into the game. Kingston broke into the Kitchener zone off the game’s opening faceoff and threw two quick shots on Carty before he was finally beaten by the third.

Just 1:31 into the period Greg Meireles was penalized for a slew-foot, which carries a match penalty and five-minute major.

Near the end of the kill with the play in the Rangers’ end, Kingston turned the puck over and Henderson and Elijah Roberts broke in on a two-on-none with Henderson electing to shoot, where he beat Helvig for his third of the season, shorthanded and unassisted, at 4:43.

With the game looking poised to go to the first intermission in a 1-1 tie, it was Sam Harding that capitalized for the visitors, tallying his fifth of the season from Justin Pringle and Stephen Desrochers to make it 2-1 at 18:22.

First period shots on goal were 21-9 in favour of the visiting Frontenacs.

The majority of the second period was scoreless, until Cascagnette buried his fifth of the season. After some pretty stick-work and patience to outlast a sprawling Helvig, Cascagnette made it a 2-2 game, unassisted – at 17:56.

After a scoreless third period, the shots on goal were 42-28 in favour of the Fronts.

Bracco’s shot in overtime was the only one by either team, sealing the win for the Rangers at the 50 second mark of five minute, 4-on-4 overtime with Frank Hora earning the lone helper.

Final shots on goal were 42-29 in favour of the Frontenacs.

Kitchener and Kingston each went 0-for-2 with the man advantage.

Dylan Di Perna and Connor Bunnaman each wore an “A” and skated as alternates to Rangers captain Frank Hora.

The Rangers cap off the weekend with a 6pm meeting with the London Knights on Sunday, December 11. They once again take to the road to face another Midwest division rival, the Erie Otters, on Wednesday night at 7pm.

The Blueshirts are back at the Aud a week from tonight, Friday, December 16 when they host the Sudbury Wolves at 7:30pm.