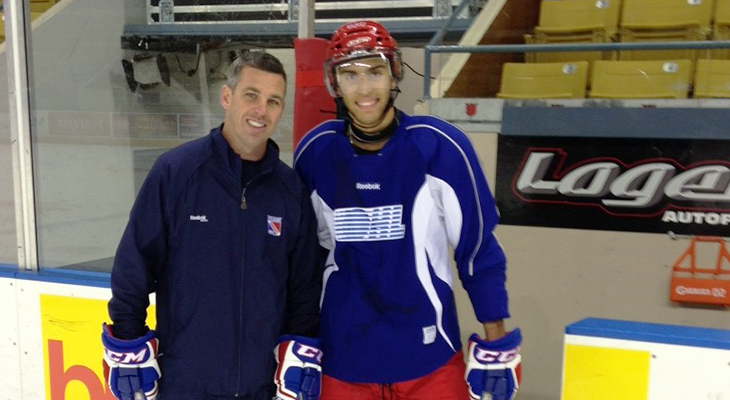 The Kitchener Rangers announced Tuesday they have named Matthew Barnaby as assistant coach of the club.

He competed in the Eastern Conference Final in 1998as a member of the Sabres.

Barnaby was a teammate of Rangers head coach Jay McKee as members of the Buffalo Sabres from 1995 to 1999, and again during the 2013-14 season while both suited up for the OHA’s Dundas Real McCoys, capturing an Allan Cup.

After retiring from professional hockey, he turned his sights to broadcasting where he served as a colour commentator for the Sabres in the 2007-08 preseason, was a co-host of The Enforcers on Time Warner Cable SportsNet, then joined ESPN as their lead NHL analyst in 2008.

He later appeared as an analyst on NHL on TSN and That’s Hockey 2Nite, co-hosted The Power Play with Scott Laughlin, and most recently was the co-host of NHL Game Day on Sirius XM satellite radio.

Since retiring from his pro playing career, he has also coached youth hockey and formed Matthew Barnaby Hockey. He orchestrated clinics and camps for young players which saw instructors and coaches such as McKee and former Rangers forward Justin Bailey.

“I am so excited to be joining the Kitchener Rangers,” said Barnaby. “I look forward to working with a lot of great young players and helping them improve and achieve their dreams.

“I want to thank the management and coaching staff for this amazing opportunity to be a part of a great team and storied franchise.”

“I am very excited and feel very fortunate to welcome Matthew Barnaby to my staff, and to the Kitchener Rangers family,” added Rangers head coach Jay McKee.

“Matthew has extensive knowledge and experience with many current players in our league. His passion for the game, attention to detail, and tremendous work ethic is going to fit in seamlessly to the culture we worked hard to create last season.”