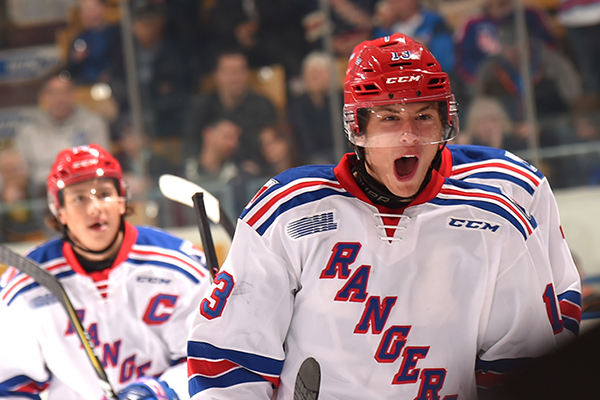 Another game, another outstanding performance by Mario Culina in goal.

Mario Culina (11-5-2-0) improved his record to 9-0-0-0 in a Rangers uniform by making 37 saves, giving his team the chance to battle back after falling behind early in the game. Since joining Kitchener Culina’s numbers have been colossally impressive, posting a 1.67 goals against average and a save percentage of 0.951%.

The Bulldogs led 1-0 after the first period, then scored twice in a 1:08 span in the opening minutes of the second period; one while on a 5-on-3 man advantage and another on a 5-on-4.

Special teams played a large part in the game’s outcome, as the two Bulldogs goals in the second period, as well as Connor Bunnaman’s 21st of the season which got the Rangers on the board in the second period to make it a 3-1 game, were all scored on the power play.

Adam Mascherin also scored on the power play (5-on-3) for the Blueshirts which cut the Hamilton lead to 3-2, then Riley Damiani tied the game in the third period with a highlight reel shorthanded marker.

Nick McHigh tallied the game winner to cap off the exhilarating comeback by the visitors, beating Bulldogs goaltender Kaden Fulcher (25-13-3-2) with just 36 seconds left in regulation to give the Rangers their first lead. Fulcher would finish the day having made 20 saves, surrendering four.

McHugh’s snipe wasn’t the end of the excitement, though, as just seconds later Hamilton forward Will Bitten was awarded a penalty shot with 11 seconds left but was ultimately stopped by Culina.

Arthur Kaliyev gave the Bulldogs a 1-0 lead at 8:24 of the first period, from Riley Stillman and Nicolas Mattinen. It was the lone goal scored in the opening frame, which saw the Bulldogs outshoot the Rangers, 16-7.

Just 31 seconds into the second period Kaliyev scored his second of the game and 24th of the season with the hosts enjoying a 5-on-3 man advantage. Benjamin Gleason and Matthew Strome earned the assists on the 2-0 goal.

On the same power play sequence, but now playing 5-on-4, the Bulldogs would strike again as Jack Hanley notched his second goal of the season, from Bitten and Connor Walters, to extend the Hamilton lead to 3-0 at 1:39.

But near the midway point of the period the Rangers got themselves on the board, as captain Bunnaman tallied his 21st of the season to cut the Bulldogs lead to 3-1, from Logan Brown and Givani Smith at 9:51.

The Rangers would head into the second intermission trailing only by one, after Mascherin registered his 35th goal of the season, from Brown and Austin McEneny, to make it a 3-2 game at 15:52.

Less than six minutes into the final frame the Rangers climbed all the way back, just as the Rangers were dealt a penalty for Too Many Men. As play resumed Damiani gained possession and skated down the ice into the offensive zone, making an extraordinary play to deke a defenceman then beat Fulcher to deadlock the game, 3-3, unassisted at 5:48.

McHugh’s game winner came at 19:23, assisted by Damiani and Joseph Garreffa, to round out the comeback.

The Rangers were 2-for-3 on the power play, while the Bulldogs were 2-for-6 with the man advantage.

Logan Brown, Austin McEneny and Adam Mascherin each wore an “A” and skated as alternates to Rangers’ captain Connor Bunnaman.

The Rangers return to action on Wednesday morning when they face the Mississauga Steelheads at the Hershey Centre for an 11am affair.