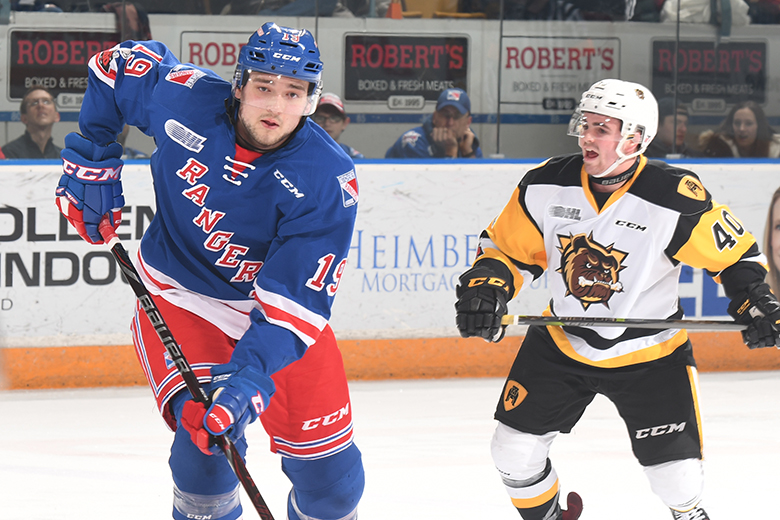 Logan Brown’s stature isn’t the only thing making him appear as a man among boys since joining the Kitchener Rangers.

Brown’s impact since being acquired by Kitchener has been immediate and impactful, having now amassed a total of 10 points (2G, 8A) in his last three games in a Rangers uniform. A part of the top line which also includes Florida Panthers prospect Adam Mascherin and Columbus Blue Jackets prospect Kole Sherwood, the trio has now registered a total of 28 points collectively in the past three games.

Sherwood tallied the Rangers’ opening goal of the game on Friday, while Mascherin chipped in a with a pair of helpers. Logan Stanley, Joseph Garreffa (PPG) and Austin McEneny were the other goal scorers for Kitchener, who extended their season-high win streak to seven games. 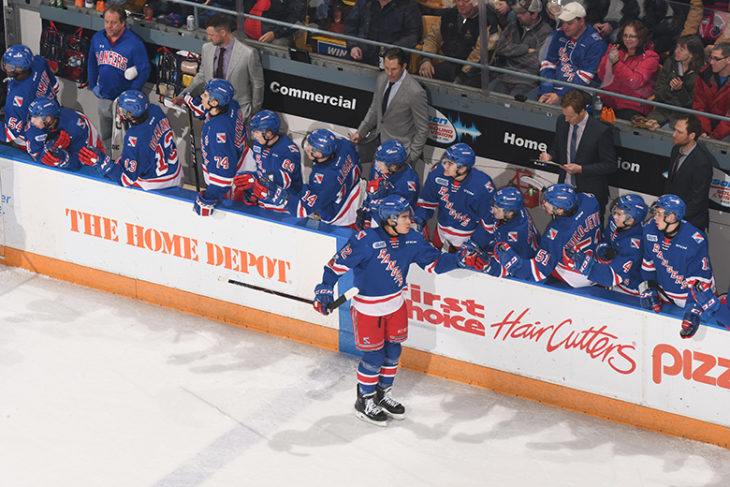 Mario Culina was once again impressive in goal for the Blueshirts, earning his ninth win of the season (9-5-2-0) by making 42 saves on 45 Hamilton shots.

Kaden Fulcher (25-11-3-2) took the loss in goal for the Eastern Conference leading Bulldogs, surrendering four goals on 30 shots. It was the first time since December 30, 2017 (10 games) that Fulcher had allowed more than three goals in a game.

The Bulldogs opened the scoring with Brandon Saigeon’s 28th goal of the season, from Nicholas Caamano and Jack Hanley, to give the visitors a 1-0 lead at 8:50 of the first period.

The Rangers would respond with Sherwood’s 21st of the campaign, from Brown and Givani Smith to notch things up, 1-1, at 15:07 of the frame.

Shots on goal through the first 20 minutes favoured the Bulldogs, 14-11. 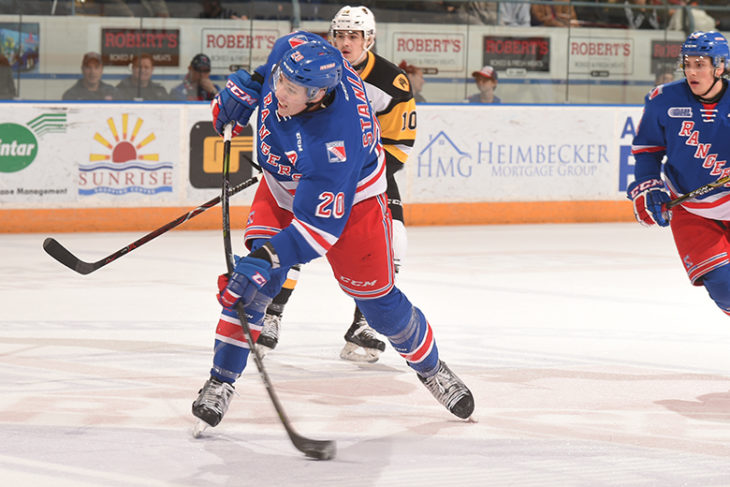 Kitchener took it’s first lead of the night on the stick of Stanley, his 13th of the year, from Brown and Giovanni Vallati, at 10:49 of the middle stanza.

But Saigeon struck again to tie the game at 2-2 at 13:49, with Marian Studenic earning the lone assist.

With under four minutes to play in the period a power play goal by Garreffa restored the Rangers lead, from Mascherin and Brown at 16:03 to make it 3-2 after 40 minutes in favour of the home side.

In the third period, with a delayed penalty coming to the Rangers, Saigeon completed the hat trick at 13:19, from Studenic and Kade Landry to square the game, 3-3.

But just 28 seconds later McEneny scored what would be the game winner, as Brown tallied his fourth point of the night with the primary assist, then Mascherin added the secondary helper at 13:47 to put Kitchener up 4-3. 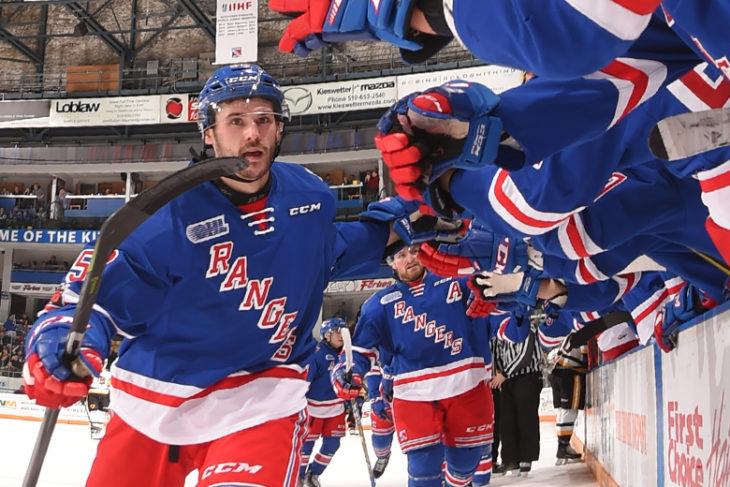 With 2:17 left on the clock the Bulldogs pulled Fulcher in favour of an extra attacker, but the Blueshirts staved off the comeback attempt.

The Rangers were 1-for-4 on the power play, while the Bulldogs were 0-for-2 with the man advantage.

Connor Hall, Adam Mascherin, and Logan Stanley each wore an “A” and skated as alternates to Rangers’ captain Connor Bunnaman.

The Rangers are back in action tomorrow night, Saturday, February 3 when they travel to Owen Sound to take on the Attack for a 7:30pm start. The Blueshirts return to The Aud for a midweek game, Tuesday, February 6 when they play host to Elijah Roberts and the Niagara IceDogs for the lone time this season at 7pm.