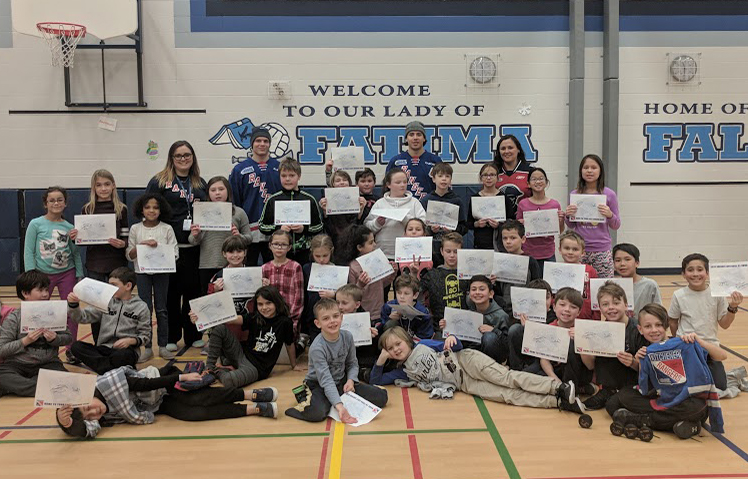 Kitchener Rangers players Connor Bunnaman and Adam Liška visited Grade 4 and 5 students at Our Lady of Fatima Catholic Elementary School in Cambridge on Tuesday, January 9 for a Captain’s Clinic on the RBC School Tour.

The Captains Clinic is a program that focuses on the importance of health and physical activity while learning fundamental hockey skills. Students have the opportunity to practice and utilize these skills in a game with their favourite Rangers players. The players explain the importance of each part of the session and how the skills apply to the game.

On Tuesday, Connor and Adam enjoyed a game of floor hockey with the students and also held a question and answer session.

One of the students asked Connor if he has to give speeches to the team, since he is the captain. He told them he usually addresses the team before each game, which led to the children asking Connor to give a speech to them.

Connor gladly obliged, and told the students they should be on their best behavior during their classes, to focus, and to listen to their teachers.

It was the first appearance on the RBC School Tour for Adam, who had a great time interacting with the students and checking out what an elementary school atmosphere is like in Canada, compared to his home of Slovakia.

Before the visit was over, Connor was asked what it was like to be drafted by an NHL team, as he was to the Philadelphia Flyers in 2016. He explained that it was a great day to be able to share with his family who helped him achieve such a big goal of his. He says it is a memory he will always cherish, and that the students can also achieve their dreams if they work hard and set their minds to it.

The next visit on the RBC School Tour will be a Read with the Rangers on Wednesday, January 31 at Bridgeport Public School.