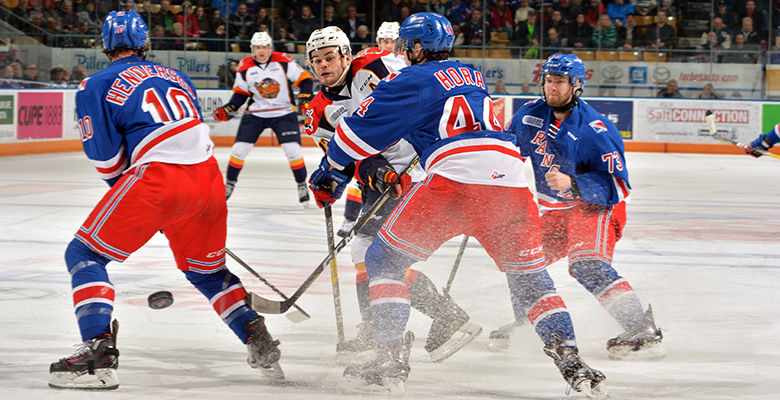 The Kitchener Rangers (36-26-3-2) said ‘Thank You’ to their fans during Fan Appreciation Night at the Aud on Friday, but they fell just short of giving them a win in their final home game of the regular season.

Connor Bunnaman scored twice, including a game-tying goal in dramatic fashion with just over a minute to play in regulation, but Alex DeBrincat’s 64th goal of the season was the game winner as the Erie Otters (49-15-2-1) skated to a 3-2 overtime win in front of 7,285 fans at the Kitchener Memorial Auditorium.

The sixth-place Rangers will take on the team that finishes third in the conference.

The Otters maintain first place with 101 points and 49 wins with one game remaining (Sat. vs GUE).

The Owen Sound Attack – who were idle on Friday night – maintain third in the conference standings with 98 points and two games to play (Sat. vs. KIT, Sun. @ GUE).

The Knights have 97 points following a 7-3 win over the Flint Firebirds tonight and have two games left to play (Sat. @ FLT, Sun. @ SSM). Although the Knights could potentially tie the Otters in points, Erie would win the first-place tiebreak with more wins.

For more playoff information, or to purchase tickets, click here.

Luke Opilka (13-13-2-1) was called upon to face twice as many shots as his Erie counterpart, and ultimately wound up with the overtime loss, despite stopping 27 shots.

Taylor Raddysh opened the game’s scoring with his 41st of the season with the Otters on the power play, assisted by Dylan Strome and DeBrincat just 3:29 into the first period.

The Rangers would square things up as Bunnaman tallied his 36th of the season just under five minutes later, from Jake Henderson and Andrew Burns, at the 8:20 mark to send the game to the first intermission tied 1-1.

Shots on goal in the first period of play were 9-6 in favour of the Otters.

Just past the midway point of the second period the Otters once again regained the lead. The goal was reviewed to ensure it completely crossed the goal line, but it was ruled a good goal. Kyle Pettit’s 26th of the season, from TJ Fergus and Darren Raddysh at 10:28, made it 2-1.

It was the lone goal of the middle frame, which saw the Otters outshoot the Rangers 14-4 for a two-period total of 23-10, Erie.

The game stayed 2-1 for the majority of the third period, until Bunnaman’s second of the night tied the game, 2-2, in dramatic fashion. He registered his 37th of the season while sprawling to the ice in the slot, beating Timpano with just 1:27 to play in regulation and effectively sending the game to extra time.

But just 1:48 into overtime DeBrincat sealed the win for the Otters, notching his 64th goal of the season, from Darren Raddysh and Strome.

Kitchener was 0-for-3 on the power play, while Erie was 1-for-2 with the man advantage.

The Rangers close out the regular season when they take on the Attack in Owen Sound on Saturday, March 18th at 7:30pm.

Tickets to the first two Kitchener Rangers’ home playoff games (Games ‘A’ & ‘B’) of Round One are on sale now. Click here for game dates and ticket information.