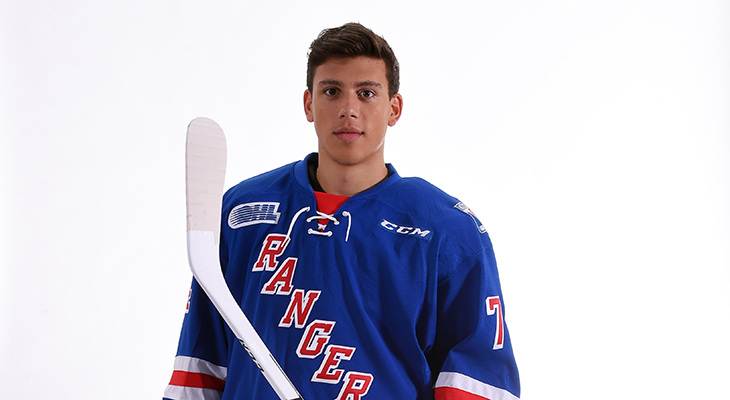 Less than 24 hours after the Kitchener Rangers endured overtime disappointment in Kingston, they turned the tides on Saturday afternoon against the Ottawa 67’s.

The Rangers trailed 2-0 early in the first period, but responded with three unanswered goals before the first 20 minutes were out to take a 3-2 lead into the first intermission. After again falling behind, 4-3, in the second period, they tied the game in the latter part of the period before eventually putting the game away in overtime.

Mascherin’s two goals now welcomes him back to the 20-goal club for the second straight season with his 20th and 21st, and gives him 20 points (12G, 8A) in his last 12 games. He has now registered points in 21 of his last 22 games, and has 16 multi-point outings this season.

Connor Bunnaman was the other goal scorer for the Rangers, notching his first hat trick of the season and second of his career.

Jeremy Bracco finished the afternoon with a trio of assists, extending his season-long point streak to 24 games and 49 points (16G, 33A).

Luke Opilka (3-2-0-0) earned the win in goal for the Blueshirts, turning aside 20 shots in regulation and another four in overtime.

Leo Lazarev (8-9-1-0) took the loss for the 67’s, allowing five goals on 24 shots through regulation and overtime.

The 67’s took an early 1-0 lead just 57 seconds after the puck was dropped, as Patrick White tallied his 11th of the season, from Artur Tyanulin and Austen Keating.

Just under three minutes later they added to their lead as Tyanulin put Ottawa up 2-0, from Carter Robertson and Sasha Chmelevski at 3:43, with the Rangers shorthanded serving a too many men penalty.

Bunnaman got the Rangers on the board, cutting the Kitchener deficit to 2-1 at 7:14 from Bracco and Riley Damiani.

Mascherin’s 20th of the season made it a 2-2 game, after a shot directed on the Ottawa goal bounced into the open cage off of a 67’s defender. Joseph Garreffa picked up the lone assist on the equalizer, which came at 13:07.

Bunnaman’s second of the game gave the Rangers their third straight goal of the frame and first lead, 3-2, at 16:07 with the lone helper to Bracco, which rounded out the five-goal first period by both teams.

Shots on goal in the first period of play were 9-7 in favour of the Rangers.

After allowing Kitchener to climb back into the game in the first period the 67’s took control once again in the second, as Drake Rymsha squared things up at 3-3, unassisted, at 5:07.

Rymsha would add another, his 12th of the season, from Jared Steege and White to put Ottawa up 4-3 at 9:27.

It was the Rangers turn to respond next, as Bunnaman completed the hat trick at 13:16, from Bracco and Giovanni Vallati, to tie the game 4-4 and round out second period scoring. Shots were at a 16-16 stalemate through 40 minutes, including a 9-7 advantage for the 67’s in the middle frame.

The third period was scoreless, sending the game to extra time where Mascherin’s heroics would give him his third game winner of the season, unassisted.

Kitchener was stymied on their one power play opportunity, while Ottawa was 1-for-4 with the man advantage.

The Rangers return home to the Aud on Wednesday, December 7th when they host the Mississauga Steelheads for the 22nd annual Teddy Bear Toss game at 7pm.