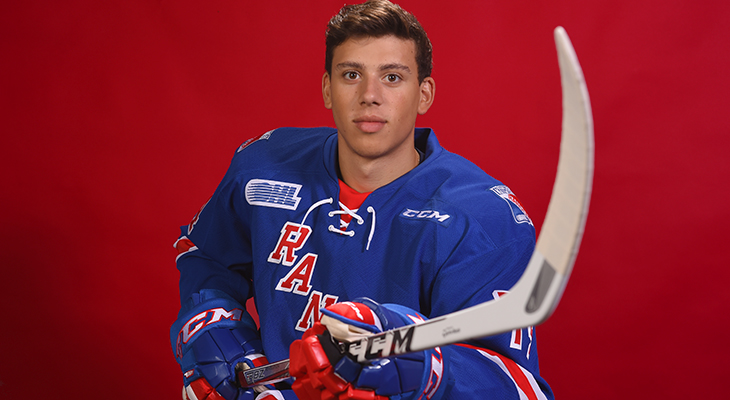 McHugh may have buried the game winner but Connor Bunnaman played a massive role in the win, which snapped a three-game winless skid for the Rangers and extended Flint’s slump to three straight losses.

Bunnaman tallied his 32nd, 33rd and 34th goals of the season for his third career Ontario Hockey League hat trick. All three goals came by way of the power play, while his first of the night gave the winger from Guelph, Ontario his 100th career regular season point.

Adam Mascherin also had a big night on the scoresheet, assisting on all three of Bunnaman’s regulation goals and upping his season point total to 98 (34G, 64A).

The win gives the sixth-place Rangers a three-point breather over the seventh-place Firebirds. The Rangers sit at 74 points with three games to play, while Flint (71) has a game in hand over the Blueshirts.

The Rangers remaining schedule sees them meet the Guelph Storm, Erie Otters and Owen Sound Attack, while the final games on the docket for the Firebirds are the Windsor Spitfires, Attack and London Knights all on the road before hosting the Knights for their final game of the season.

Luke Opilka (12-13-1-1) made his first start since February 12th and earned the win, turning aside a plethora of 42 Firebirds shots in regulation and overtime.

The Rangers needed their blueliners to step up, as they played a man short for the majority of the game following an injury to Giovanni Vallati in the first period which saw the rookie leave the game.

Bunnaman opened the game’s scoring with his 32nd goal of the season, a power play goal at 14:10 of the first period with the assists to Mascherin and Riley Damiani.

The first period would end with the Rangers maintaining the 1-0 lead, outshooting the Firebirds 14-9 through 20 minutes.

The Firebirds would open the second period with a power play marker of their own, as Nicholas Caamano scored his 31st of the season, from Ryan Moore and Kole Sherwood, at 2:29 with a tip-in that beat Opilka.

But Kitchener would regain the lead once again, and once again with a power play marker as Bunnaman notched his 33rd of the season and second of the night to make it 2-1 Kitchener, from Mascherin and Darby Llewellyn, at 12:35.

Bunnaman completed the hat trick with just 1:25 to play in the middle frame – his third power play goal of the evening – from Llewellyn and Mascherin to give the Rangers a 3-1 lead.

Second period shots on goal were 16-13 Kitchener for a two-period total of 27-25, Rangers.

Just as the third period got underway the Firebirds cut the Kitchener lead to 3-2, as Caamano tallied his second of the night, this time during 4-on-4 play, unassisted at 1:17.

The Firebirds would come all the way back to tie the game, 3-3, and did so in dramatic fashion. Alex Peters scored the equalizer with just 1:03 to play, his ninth of the season, from Moore and Sherwood.

The Rangers would get the last laugh though, as Frank Hora broke into the Firebirds zone along the far side and found McHugh coming into the slot, who buried his 12th of the season for the game winner at the 1:41 mark of the extra frame. Greg Meireles picked up the secondary assist.

Shots on goal weighed heavily in Flint’s favour in the third period, 18-3. Overtime shots were 3-2 for the visitors for a game total of 45-33, Firebirds.

Kitchener was 3-for-6 on the power play, while Flint was 1-for-5 with the man advantage.

The Rangers make their final visit of the season to the Sleeman Centre to take on the Guelph Storm on Tuesday, March 14th at 7pm before finally returning home for their final home game of the regular season – ‘Fan Appreciation Night’ – on Friday, March 17th at 7:30pm vs. the Erie Otters.

Tickets to the first two Kitchener Rangers’ home playoff games (Games ‘A’ & ‘B’) of Round One will go on sale Friday, March 17th at 10am. More information on playoff tickets can be found here.

Playoff opponent, game dates, and times are yet to be determined and will be announced once confirmed. Round One will begin no sooner than March 23rd and end no later than April 4th.