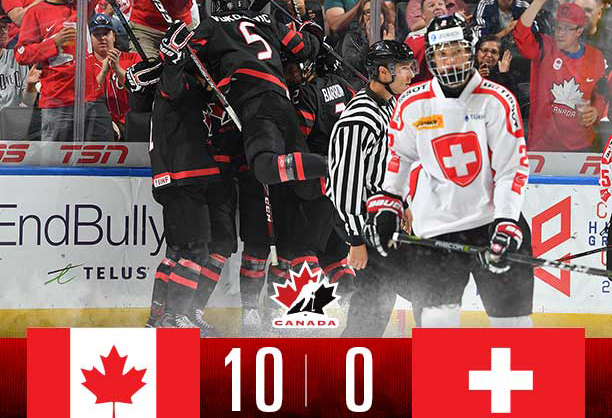 Edmonton, Alta. – Playing their first summer under-18 contest on home ice in 22 years, the Canadians charged out of the gate, overwhelming Switzerland in a 10-0 victory to begin their 2018 Hlinka Gretzky Cup schedule at Rogers Place.

“It’s good for your momentum, going into the tournament, but at the end of the day, that game’s over with and we just have to focus on the next one,” said Suzuki post-game. “Anytime you put the 22 best Canadians on the ice, things come together. We have a lot of talent on this team, [and] to see these fans wearing the Canadian jersey and come out to support you, it’s just amazing. I got chills every time I stepped on the ice.”

Nolan Maier (Saskatoon Blades) recorded the shootout, stopping all 15 shots he faced as Canada outshot Switzerland 48-15 while going 3-for-5 on the power play.

Canada is back in action on Tuesday night against Slovakia (0-1). The puck drops at 7:00pm MT/9:00pm ET at Rogers Place.