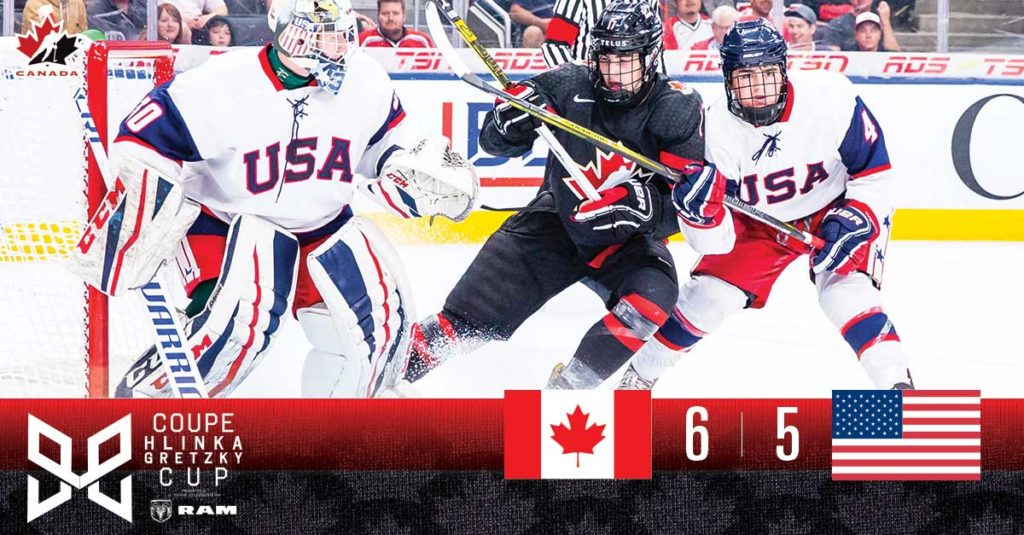 Edmonton, Alta. – It was a Canada-United States semi-final tilt that won’t soon be forgotten, blending high-paced excitement, controversy and overtime heroics at Rogers Place as Canada came out on top by a score of 6-5.

“Great rush by Krebsy [Peyton Krebs] there, he made a great drop-pass, and I was lucky enough to get my spot and it went in,” said Williams, recalling the lead-up to the game winning goal. “That was probably the biggest [goal] of my life, and it felt real good. Now we just have to focus on tomorrow.”

Cozens’ tying-goal came with no shortage of controversy as it was ruled on the ice that the puck crossed the goal-line before the final horn sounded. Williams’ game winner followed shortly after as the Medicine Hat forward entered the zone late off the rush and snapped a release past Team USA’s Dustin Wolf (Everett Silvertips).

FINAL | @Dylan_Cozens tied it with a buzzer-beater and @willie142001 won it early in OT, sending ?? to the gold medal game with a wild extra-time win over ??. RECAP: https://t.co/1h9B9ueBb5 #HlinkaGretzkyCup pic.twitter.com/7IAUs7JNRw

Canada trailed 3-2 after one period as Team USA’s Nicholas Robertson (Peterborough Petes) scored the first two goals of what would be a hat-trick on the night while Aaron Huglen also found the back of the net for the Americans. Alexis Lafrenière (Rimouski Oceanic) and Jamieson Rees (Sarnia Sting) were first period goal scorers for Canada.

An Xavier Parent (Halifax Mooseheads) power play marker 8:34 into the second period knotted the score up at three, setting up what would be an exciting third period before an energetic crowd in Edmonton.

Williams scored his first of the night, also on the man advantage with an assist to Ryan Suzuki (Barrie Colts) to put Canada in the lead 4-3. Robertson responded with 8:02 left on the clock to complete the hat-trick and reinstate the tie as Arthur Kaliyev (Hamilton Bulldogs) picked up his second assist of the night.

Late goals from @Dylan_Cozens and @willie142001 shock USA, @HockeyCanada to play for gold at #HlinkaGretzkyCup.

The United States outshot Canada 39-34 as Nolan Maier (Saskatoon Blades) earned the win in goal with a 34-save performance. Wolf turned aside 28 shots in the loss for the U.S.

With a goal and an assist, reigning CHL Rookie of the Year Alexis Lafrenière (Rimouski Oceanic) vaulted himself into the tournament scoring lead with eight points (3-5–8) over four games.

Canada is into the gold medal game, looking to repeat as champions after winning it all last summer in the Czech Republic. The United States will play Russia for bronze on Saturday at 3:00pm MT/5:00pm ET, looking to return to the podium for the first time since 2016 when the won silver.