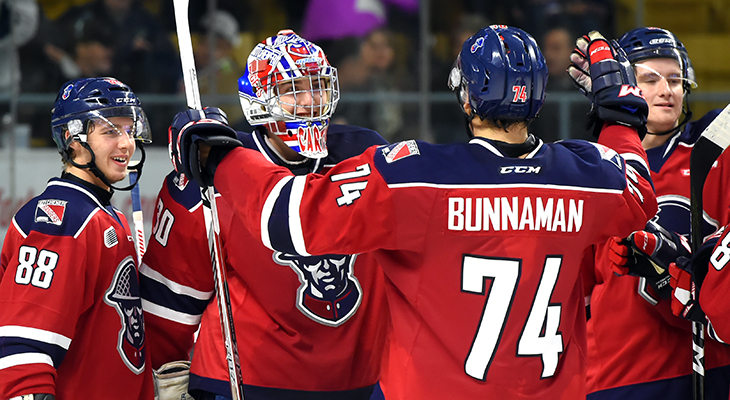 Head Coach Jay McKee wanted his team to respond after a tough loss on Thursday night in London, and Dawson Carty gave him exactly what he asked for.

Carty made 44 saves for his second career Ontario Hockey League shutout as the Kitchener Rangers (7-3-0-1) blanked the Hamilton Bulldogs (7-3-0-0) by a score of 2-0 in front of 7,090 fans at the Kitchener Memorial Auditorium on Friday night.

It was the first shutout of the season for Carty (7-1-0-1), who stymied the league’s most potent offence with everything from a high volume of saves, to a highlight-reel stop in the second period, and even shutting down the opposition on a penalty shot.

Adam Mascherin and Connor Bunnaman each had a goal and an assist to lead the Rangers offensively. Mascherin and Bracco (1A) each keep their now eight and six game point streaks active.

Kaden Fulcher (7-2-0-0) took the loss in goal for the Bulldogs, snapping a five-game win streak by surrendering two goals on 30 shots.

The Rangers at one point trailed 12-2 in first period shots on goal. It was a 12-6 margin when Bunnaman gave Kitchener a 1-0 lead, a power play goal from Dylan Di Perna and Mascherin, at 14:04. It was the lone goal of the opening frame, which saw the Rangers come back to outshoot the Bulldogs 13-12.

Kitchener would again capitalize on the power play, as Mascherin tallied his fifth of the season to extend his current point streak to six games (4G, 11A = 15 points). Bracco picked up the primary assist on the goal to extend his season long point streak to eight games (7G, 12A = 19 points), while Bunnaman picked up his second point of the night with the other assist.

Following Mascherin’s goal the Rangers were dealt a double minor for high-sticking, but were successful in killing off the four-minute Hamilton man advantage.

Later, referees ruled that MacKenzie Entwistle was tied up by a Rangers defenceman deep in the Kitchener zone and awarded a penalty shot at 13:45, but he was turned aside on the shortside attempt by Carty.

Carty came up huge again before the period was out, absolutely robbing Michael Cramarossa with a flashy glove save while the Bulldogs were on the power play with just 1:18 left to play in the period.

The teams would go to the second intermission with the Rangers maintaining the 2-0 lead, with Hamilton outshooting Kitchener 27-26 through 40 minutes of play.

Third period action yielded no more goals but 16 more key saves by Carty, as the Bulldogs outshot the Rangers 16-4 in the final frame. Final shots on goal were 44-30 in favour of Hamilton.

Kitchener was 2-for-5 on the power play, while Hamilton was 0-for-5 with the man advantage.

Doug Blaisdell, Darby Llewellyn and Dylan Di Perna each wore “A’s” and skated as alternate captains for the Rangers.

The Rangers have a day off tomorrow before they close out the weekend by making their one and only visit to the Hershey Centre to face the Mississauga Steelheads on Sunday, October 23 at 2pm.

They return home one week from tonight, Friday, October 28, when they host another Eastern Conference opponent, the Peterborough Petes, at 7:30pm.