Connor Bunnaman excited and motivated after being drafted by the Flyers 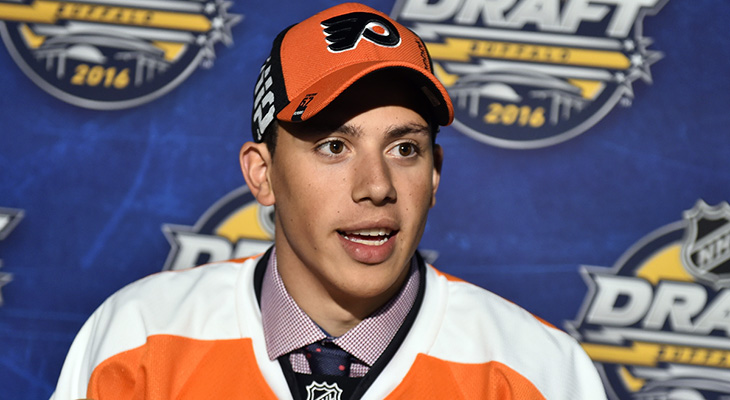 Any young hockey player dreams of one day hearing your name called at the NHL Draft; it’s the wait before hearing it that’s pure agony.

But if you’re one of the lucky few that sees that dream become a reality, the feelings range from jubilance, excitement, joy and shock, to name a few. Connor Bunnaman needed just one word to describe how it felt for him.

“Unbelievable,” said the 18-year old, who was selected by the Philadelphia Flyers in the fourth round, 109th overall. “When you finally hear your name called, it’s hard to find any other way to describe the feeling.”

What made the whole experience even more rewarding for Bunnaman was the fact he got to share it with so many people who have helped to mould him into the player – and young man – he’s become.

“My whole family was there; my mom and dad, my grandparents,” he said, reflecting back on the day just three weeks ago.

He thought back to how special a moment it was, but also the sacrifices, hard work and the dedication it took for him to get there – and not only on his part, either.

“He’s just my biggest fan and I can’t thank him enough for everything he’s done to get me to where I am now.”

And where he is now, of course, is one step closer to achieving his goal of one day dressing for an NHL game.

“I feel like I fit in well with what they’re doing in Philadelphia,” Bunnaman said. “I consider myself a two-way, power forward. I create space well for others so I think I fit into their system well.”

The feeling is clearly mutual, since after meeting with the Flyers prior to both the Combine and the Draft, the centreman said the conversations with the team gave him an inclination that ‘The City of Brotherly Love’ could indeed be where he lands.

“I had a good feeling about the Flyers picking me. I felt like they just had the most interest in me when I spoke with them at the Combine and before the Draft. I felt comfortable with them.”

That level of comfort just might have been tested, at least initially, in the first day of going to Philadelphia for Development Camp. Bunnaman had never been to the city before, but was looking forward to what it had in store.

“I didn’t have any connections to Philly, I’d never been there,” he said. “But I knew it should be fun though. I’m excited to learn more about the organization and become more familiar with the team.”

“[He] always told me I play like Franzen,” agreed Bunnaman. “He’s a big guy that goes in front of the net, goes in the corners, and creates space for others.

“My coaches since I’ve become a member of the Rangers have been amazing in helping me grow into that type of a player. We have an unbelievable coaching staff and trainers. I can’t say enough great things about the organization.”

He was quick to compliment his teammates Connor Hall and Adam Mascherin, who were also drafted three weeks ago in Buffalo.

When asked his thoughts on the fact that he and Hall were now members of two state rival teams – the Flyers and the Pittsburgh Penguins – he chuckled, but insisted there’s no bad blood while the two are still members of the Rangers.

“No, we haven’t really talked about the potential to be rivals that much yet,” he laughed. “Although, it would be cool if that happens one day.”