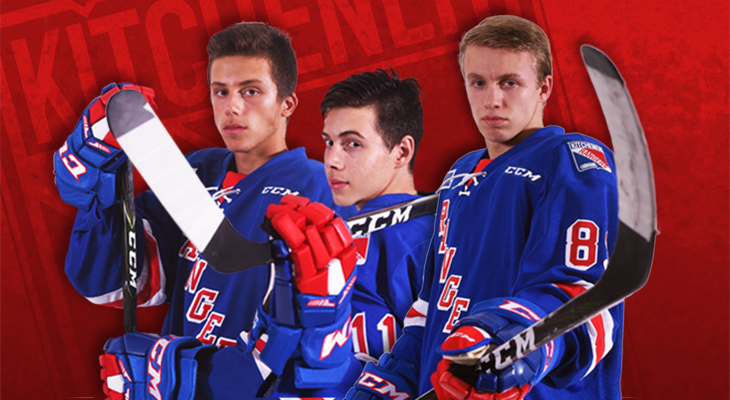 Three Kitchener Rangers – Riley Damiani, Eric Guest and Giovanni Vallati – are among 66 of Canada’s best young hockey players selected to represent their country at the 2016 World Under-17 Hockey Challenge in Sault Ste. Marie, ON from October 27 – November 5.

Vallati will dress for Team Canada Black, while Damiani and Guest will skate for Team Canada Red. Along with Team Canada White, they will also face teams from Czech Republic, Finland, Russia, Sweden, and the United States in their quest for gold. The selection process began with 111 players who took part in a seven-day development camp in late July.

“These are the 66 best players in the country who are, by-and-large, making their first appearance in international competition as part of Hockey Canada’s Program of Excellence. They have been selected not only based on their current ability, but also on their potential to represent Canada  at under-18 and junior competition in the coming years,” said Shawn Bullock, senior manager of hockey operations and men’s national teams for Hockey Canada. “This is a skilled group of high-performers with long-term international potential, and we look forward to working with them at  the World Under-17 Hockey Challenge, and in the future.”

Hockey Canada’s Program of Excellence officially begins with the under-17 development camp in July, and runs through the men’s high-performance camps and teams up to, and including, Canada’s National Junior Team. Of the 66 players selected to wear the Maple Leaf, only Joe Veleno (Kirkland, Que./Saint John, QMJHL) has competed at the event before; Veleno, 16, was a member of Team Canada Black at the 2015 World Under-17 Hockey Challenge, and represented Canada at the 2016 Ivan Hlinka Memorial Cup in August.

The Essar Centre and John Rhodes Community Centre will play host to the eight teams who will gut it out during six days of competition in the hopes of securing gold for their country. Team Canada Black, Team Canada White, the Czech Republic and United States will play in Group A, while Team Canada Red, Finland, Russia and Sweden will comprise Group B.