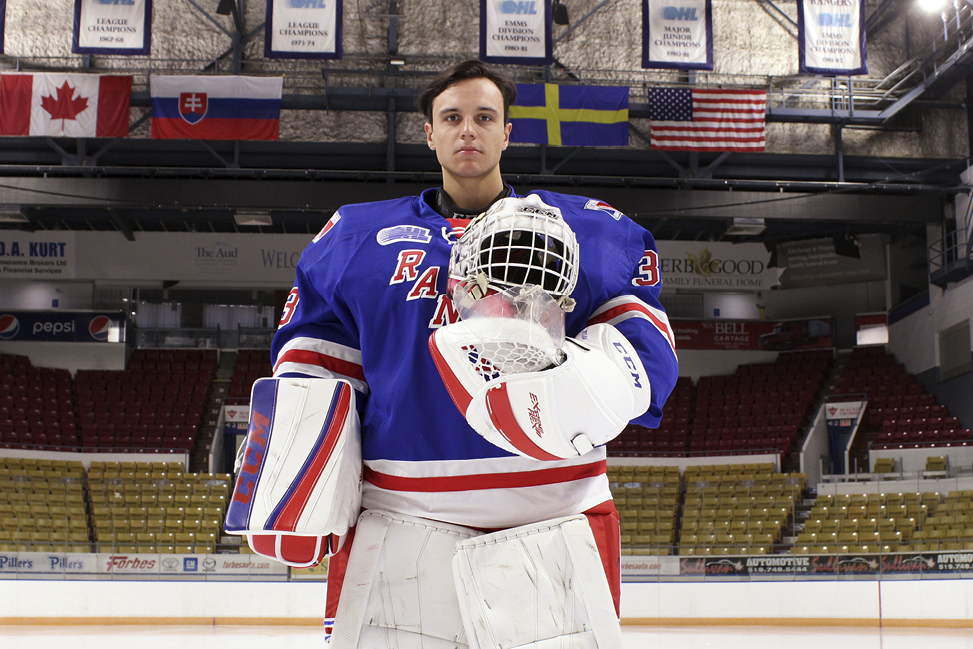 Anthony Dumont-Bouchard earned his first career Ontario Hockey League win, turning aside 36 of 37 shots as he led the Kitchener Rangers (1-1-0-0) to a 3-1 win over the host Sarnia Sting (1-1-0-0) in front of 2,800 fans at Progressive Auto Sales Arena on Saturday night.

The 20-year-old overager backstopped the Rangers to what was also their first win of the season, rebounding after a frustrating loss at the hands of the Flint Firebirds less than 24 hours ago.

Dumont-Bouchard (1-0-0-0) was beaten only once, while the team shorthanded in the closing minutes of the opening frame. From there, he made 25 straight saves through the final 40 minutes en route to the victory.

The Sting three times battled back to tie their season opener versus the Guelph Storm last night and eventually skated to victory in a shootout, 4-3, but that offence wasn’t there for the hosts tonight, despite outshooting the Rangers in all three periods of play.

Riley Damiani scored in his second straight game for the Blueshirts, while Cole Carter’s first of the season was the eventual game winner.

Not only has the return of defenceman Doug Blaisdell bolstered the team physically and mentally but he’s also making an impression on the scoresheet, as well. The blueliner scored his first goal since October of last season – an empty net marker – to secure tonight’s win for the Rangers.

Overager Justin Fazio (1-1-0-0) manned the goal for Sarnia and was dealt the loss, surrendering two goals on 24 shots he faced.

Damiani gave the Rangers a 1-0, late-period lead at 15:57 of the opening frame, assisted by Connor Bunnaman and Jake Henderson, but before the horn sounded for the first intermission the Sting would tie the game.

Jordan Ernst made good on Sarnia’s second power play attempt to even things up, 1-1, just 1:57 later from Braden Henderson and Drake Rymsha, which then closed out period scoring.

Shots on goal favoured the Sting 12-8 through the first 20 minutes.

The lone goal of the second period proved to be the eventual game winner and it belonged to Cole Carter, as the winger received a pass in the slot from Damiani and tipped it up over the head of a sprawling Fazio to restore the Rangers one-goal lead, 2-1.

The victory was iced for the Rangers when Blaisdell tallied the empty net marker at 19:52 of the third period.

Final shots on goal were 37-25 Sarnia, including 15-7 Sting in the third period of play.

The Rangers would finish the night scoreless on the power play going 0-for-3, yet gave up considerably fewer penalties than a night ago. The Sting capitalized just once on their four opportunities with the man advantage.

Blaisdell, Carter and Adam Mascherin each wore an “A” and skated as alternates to captain Connor Bunnaman.

The Rangers head to Windsor to do battle with the Spitfires on Thursday, September 28th at 7:05pm before returning home on Friday, September 29th at 7:30pm when they host the Owen Sound Attack.

1:17
jesse fishman rangers vision
RANGERS VISION: This or That - Jesse Fishman
19 hours ago