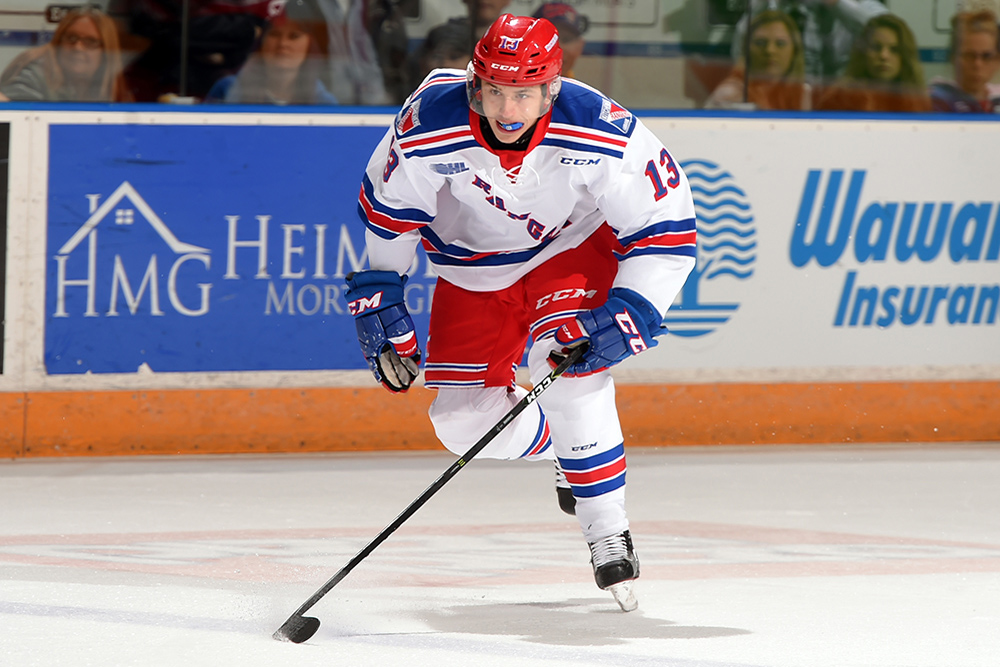 The Guelph Storm served up some payback to the Kitchener Rangers at the Sleeman Centre on Tuesday night.

After falling into a 3-0 deficit, the Storm rallied to score four unanswered goals – the tying goal with only 1:49 to play and the game winner just 56 seconds into overtime – to skate to a 4-3 win in front of a crowd of 4,911 fans in the Storm’s final regular season home game.

The last time the two teams met on March 4, it was the Rangers who rallied for two goals in a span of 23 seconds with just 1:13 to play to tie the game, before Joseph Garreffa won it for the Blueshirts in overtime.

The two points the Storm pick up tonight against the Rangers make the western conference playoff race that much more interesting, as Guelph entered the game in the eighth spot and now jump to sixth, leapfrogging both the Windsor Spitfires (30-29-0-2) and Saginaw Spirit (29-28-8-0) in the standings.

Statistically, the Rangers (43-20-3-0) could still face any of those three teams in the opening round of the playoffs, depending on how these final handful of regular season games play out.

Riley Damiani opened the game’s scoring with less than a minute remaining in the opening frame. Positioned alone at the side of the net, he buried a one-timer on a pretty feed from Adam Liška to put the visitors up 1-0. Greg Meireles picked up the secondary assist on the goal, which was the lone marker of the first period at 19:09.

Shots on goal in the first period favoured Kitchener, 18-10.

Logan Brown tallied his 21st goal in just his 30th game of the campaign – including his 13 goal in 15 games since coming to Kitchener – giving the Rangers a 2-0 lead at 2:41 of the second period, from Kole Sherwood and Jack York.

Just 1:18 later Damiani registered his second of the night, extending the Blueshirts lead to 3-0, from Meireles and Nick McHugh at 3:59.

Ten minutes later the Storm would get themselves on the board, as Zach Poirier beat out an icing call then fed Ryan Merkley who scored his 13th of the season to cut the Rangers lead to 3-1. Barret Kirwin picked up the second helper on the goal at 13:54.

Just past the midway point of the third period the Storm came within one, as they made it a 3-2 game on the stick of Mason Primeau, from James McEwan and Dmitri Samorukov at 11:18.

The Storm climbed all the way back, tying the game 3-3 with just 1:49 left to play as Alexey Toropchenko notched his 16th of the year, from McEwan, sending the game to overtime.

Shots on goal through regulation favoured the Rangers 39-25. Each team added a shot on goal in the overtime period.

Luke Richardson (23-11-2-0) took the loss in net for the Rangers, surrendering four goals on 26 Storm shots.

The Rangers were 0-for-2 on the power play, while the Storm were 0-for-3 with the man advantage.

Mark Shoemaker (GUE) (3), James McEwan (GUE) (2), and Garrett McFadden (GUE) (1) were selected as the Three Stars of the Game as the Storm recognized their overagers one last time on home ice during their regular season careers.

The Rangers are back in action tomorrow night for another road tilt, this time against the Sarnia Sting at 7:05pm.

Kitchener’s final home game doubles as their last regular season game, as they host the Storm on Friday, March 16 at 7:30pm for Fan Appreciation Night.

Kitchener Rangers playoff tickets are on sale now. More information – including how fans can purchase – can be found here.