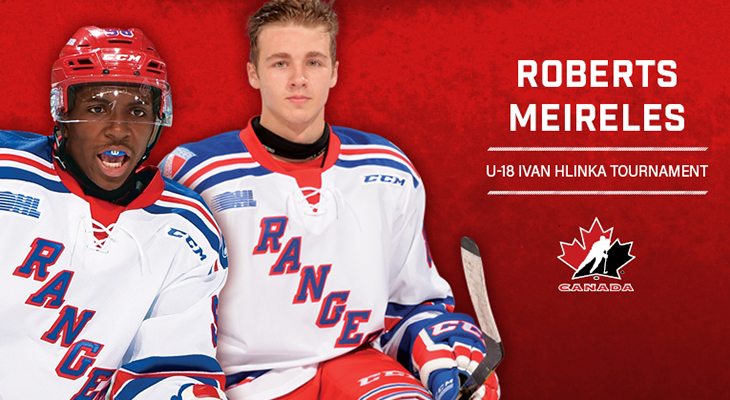 Elijah Roberts and Greg Meireles were among 44 players invited to the 2016-17 National Men’s U-18 Team Selection Camp roster as part of the National Teams’ Summer Showcase from July 26-August 6.

Four Rangers selections from this past May’s OHL Priority Selection including Merrick Rippon, Giovanni Vallati, Riley Damiani and Eric Guest have all been invited to take part in the U-17 camp.

Ryan Jankowski, director of player personnel for Hockey Canada, was responsible for all player selections, with assistance from regional scouts Carl Bouchard (Quebec), Barclay Branch (Ontario), Wade Klippenstein (West), Kevin Mitchell (Atlantic), and Darrell Woodley (Ontario) for the Under-17 roster along with branch representatives, and with input from coaches and general managers from across the Canadian Hockey League for the Under-18 and Under-20 rosters.

“This is a fantastic opportunity for us to showcase the talent we have across the country, and for our coaches and scouts to evaluate the players in our programs,” said Scott Salmond, Hockey Canada’s vice-president of hockey operations and national teams. “These camps are key in selecting our international teams for the 2016-17 season, and we are looking forward to hosting 196 players as they work towards their ultimate goal of wearing the maple leaf.”

Of the 44 players who have been invited to the selection camp, 22 will be selected for Canada’s National Men’s Summer Under-18 Team for the 2016 U18 Ivan Hlinka Memorial Cup, August 8-12 in Breclav, Czech Republic and Bratislava, Slovakia. Canada has won the summer Under-18 tournament 11 times in the last 12 years, including the last eight consecutive years.

July 26-August 1: 111 players – 12 goaltenders, 36 defenceman and 63 forwards will participate in practices and games on one of six teams: Black, Blue, Gold, Green, Red, and White.

Following the development camp, players will continue to be evaluated through the early season before 66 are selected to represent Canada on one of three national teams – Team Canada Black, Team Canada Red, and Team Canada White – at the 2016 World Under-17 Hockey Challenge, which is scheduled for October 30 – November 5 in Sault Ste. Marie, Ontario.

This year, 110 players have been drafted or listed by CHL teams, including 42 from the Ontario Hockey League, 40 from the Western Hockey League and 28 from the Quebec Major Junior Hockey League.

July 30-August 6: 41 players – Four goaltenders, 14 defencemen and 23 forwards will participate in practices on July 30-August 2 in Toronto before playing in a series against the Finland, Sweden, and the United States at the USA Hockey Arena in Plymouth, Mich.

Jankowski will continue to monitor these players and other potential candidates during the first few months of the 2016-17 season and at the CHL Canada Russia Series to determine who will be invited to Canada’s National Junior Team selection camp in December. In total, 22 players will be selected to represent Canada at the 2017 IIHF World Junior Championship when it returns to Canadian ice December 26, 2016 to January 5, 2017 in Toronto and Montreal.