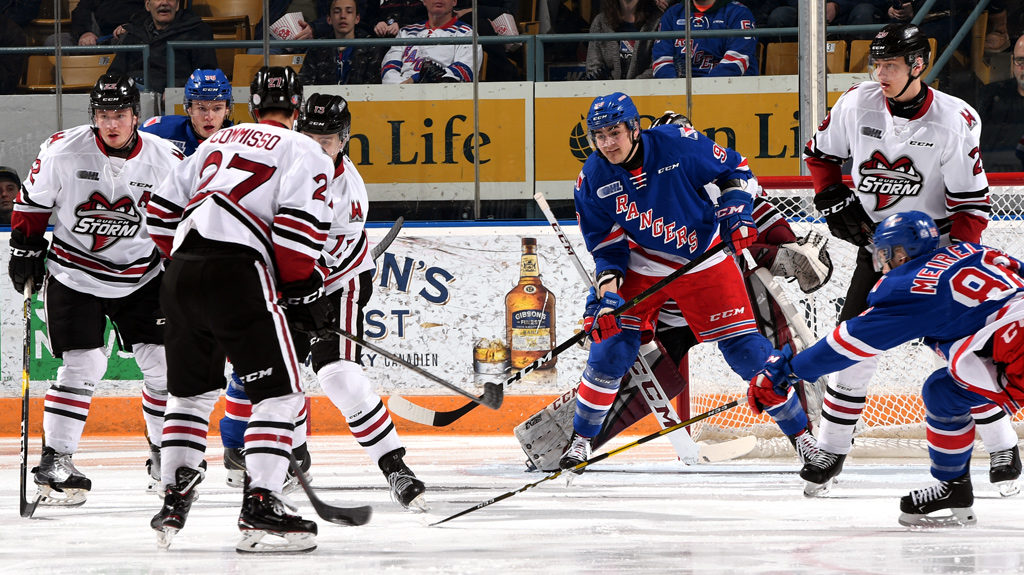 Kitchener, ON: Game three of the Western Conference Quarter-Final featured a tighter match-up between the Rangers and the Storm at The Aud. Jonathan Yantsis led the way for the blueshirts with two goals but unfortunately, Guelph edged Kitchener 6-3 to take a 3-0 series lead.

Luke Richardson made 38 stops in the loss and picked up the game’s third star.

Jonathan Yantsis took the Rangers’ first infraction of the game for a cross-check at 8:54 of the opening period.

On the ensuing powerplay, Isaac Ratcliffe and Mackenzie Entwistle set-up Nick Suzuki for his second goal of the playoffs to put the Storm up 1-0 at 10:09.

Kitchener was quick to strike back. Off a turnover at centre ice, a shot by Alexey Lipanov rebounded off the glass on the end boards right onto the stick of Joseph Garreffa who buried his first goal of the playoffs at 10:54 to tie it up, 1-1.

The period would end with Yantsis is the box and the game tied at a goal apiece.

The Rangers outshot the Storm through the opening 20 minutes of play, 18-16.

At 37-seconds, just seconds after he came out of the penalty box, Yantsis picked up a rebound off a Mike Petizian shot on Anthony Popovich and scored his first of the playoffs to give the Rangers their first lead of the series, 2-1.

Guelph responded in-kind at 1:14 when Liam Hawel kicked it out from behind the net to Nate Schnarr who put it past Luke Richardson to tie the game up, 2-2.

At 2:36, the Storm regained their lead when a Suzuki backpass to Schnarr was slid past the Rangers netminder to make it 3-2.

The Storm extended their lead at 6:15 when Alexey Toropchenko went top corner to score his third goal of the playoffs and put the visitors up 4-2.

Suzuki opened up Guelph’s lead further when a shot from just outside the faceoff circle went five-hole on Richardson and it was 5-2 at 6:49.

Kitchener struck back at 7:29 when Yantsis rifled a shot over the blocker-side shoulder of Anthony Popovich to bring the Rangers within two, 5-3.

Garreffa and Michael Vukojevic earned assists on Yantsis’ second goal of the night.

The second period would end with the Storm ahead in shots, 37-26.

The third period didn’t see a goal until the 19:20 mark of the period when Dimitri Samorukov scored an empty net goal for the visitors to wrap up the game.

The Rangers return to home ice playoff action on Thursday, March 28 for game 4 of the Western Conference Quarter Final. Click here for a complete schedule of games.

all news community
Rangers and Sting complete trade
4 hours ago