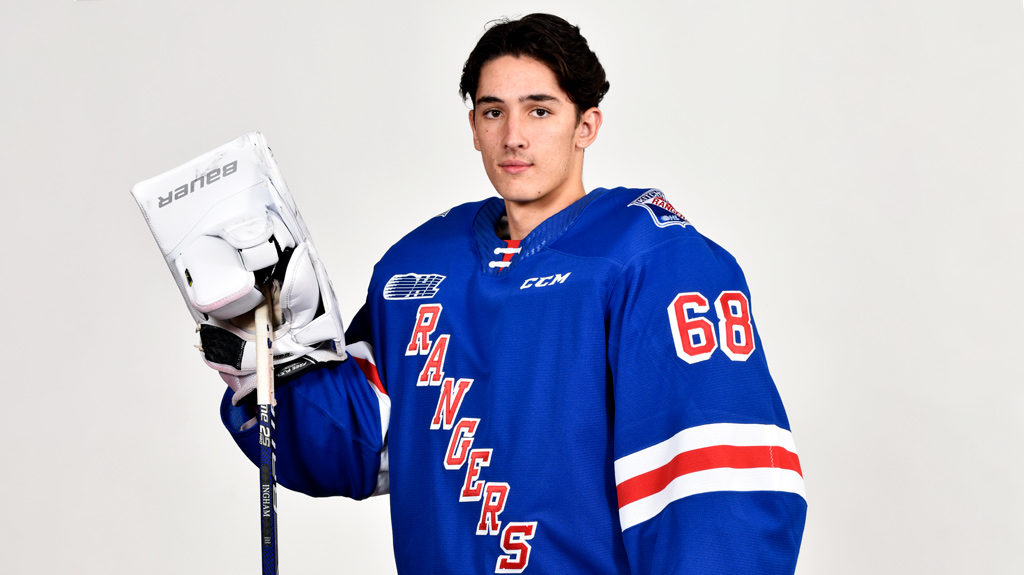 North Bay, ON: The Rangers started their three-game northern road trip in North Bay on Thursday night to take on the Battalion at the Memorial Gardens.

For the second time in as many games, Kitchener came from behind to force overtime. However, unlike their season opener, they couldn’t pull out the win, losing 3-2.

Franceso Pinelli and Jonathan Yantsis scored for the Rangers. Jacob Ingham saved 28 in the loss.

The Battalion opened the scoring at 14:17 of the first period. The home side broke across the blueline with a three-on-two and a pass from Mitchell Russell found Harrison Caines on Jacob Ingham’s far side and the left-winger made good on the opportunity to score his first of the season to make it 1-0.

Shortly after the opening goal, the Battalion found themselves on a breakaway after a turnover at the Rangers offensive blueline and Ingham came up with a big save to keep the Rangers down by just one going into the intermission.

The second period saw a number of penalties, including three to the Rangers, called prior to the period’s halfway mark.

At 10:10, Paul Christopoulos shot produced a huge rebound that ended up on the stick of Brad Chenier who shot into traffic and put if off the post and in, on the powerplay, to make it 2-0.

North Bay’s Luke Moncada took a double-minor penalty for spearing at 11:25 that led to a four-minute advantage for the Blueshirts.

While on the powerplay, at 13:03, rookie centreman Franceso Pinelli put a shot on net that was blocked by Joe Vrbetic but on a second opportunity, Pinelli backhanded it past the Battalion netminder to cut the deficit in half, 2-1.

Riley Damiani and Jonathan Yantsis picked up assists on the goal.

On the ensuing powerplay, Donovan Sebrango fired a shot from just in front of the blue line that was tipped by Yantsis, and at 19:00 the game was tied.

Liam Hawel also earned an assist on Yantsis’ third goal of the season.

Despite a number of chances and spectacular saves for both teams, the score remained tied through the third period.

For the second time in as many games, the Rangers came from behind to force overtime.

Shots were 31-30 in favour of Kitchener after 60 minutes.

Eight seconds into overtime, Ville Ottavainen got his stick up on Matthew Struthers and drew blood, which led to a double minor for the defenceman.

On the powerplay, Chenier scored his second of the night to win it for the Battalion, 3-2.

Kitchener’s next game is on the road on Friday, September 27 at 7:07 versus the Sault Ste. Marie Greyhounds. The Rangers return home on Friday, October 4 at 7:30 pm versus the Owen Sound Attack.