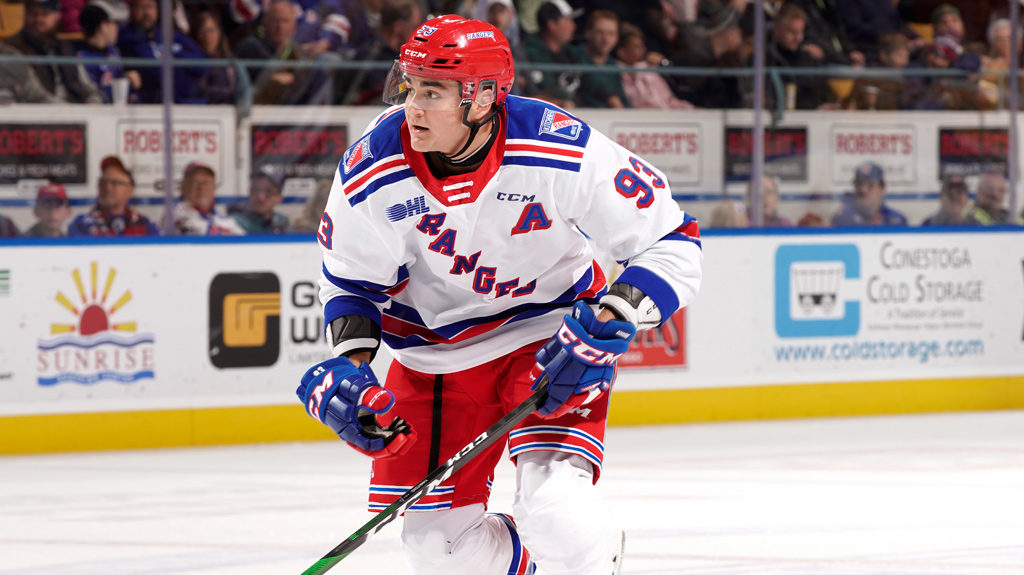 Kitchener, ON: It was the battle of two CHL honourable mention teams at The Aud on Friday night as the Flint Firebirds (6-3-0-0) squared off against the Rangers (5-1-2-2).

Jonathan Yantsis led the way for the Rangers with two goals. His first goal, at 12:31 of the first period, earned him 100 OHL points for his career.

A late goal in the third period by Ville Ottavainen tied the game up and sent it into overtime. In the extra frame, Vladislav Kolyachonok scored for the Firebirds to give the visitors the 4-3 win.

It was the Firebirds who struck first at 8:17 when Riley McCourt (3), on an assist from Braeden Kressler, shot high, blocker-side on Jacob Ingham to give the visitors the lead, 1-0.

Kitchener struck back at 12:31 when Jonathan Yantsis (6), streaking down the right side, wristed a shot past Anthony Popovich to tie it up, 1-1.

The goal was assisted by Donovan Sebrango and Justin MacPherson and was Yantsis’ 100th OHL point.

The first period would end with no more action on the scoreboard. Shots were tied 13-13.

At 41 seconds of the 2nd period, a slap shot from just in front of the blue line by Riley Damiani was tipped by Yantsis (7) to give the Rangers the lead, 2-1.

Sebrango picked up his second assist on the night on the game’s third goal.

Kitchener took near-successive powerplays midway through the second period and on the second powerplay, at 14:38, Brennan Othmann (4), the OHL’s second-leading rookie scorer, tied the game up 2-2.

After 40 minutes, the game remained tied and the visitors pulled ahead in shots 27-21.

At 11:41, the Firebirds found themselves on an odd-man rush heading into the Rangers zone and a pass by Cody Morgan was tipped in by Even Vierling, past a sprawling Ingham, to make it 3-2.

The Rangers tied it up once more when an outstanding individual effort by Ville Ottavainen (2) led to him beating Popovich up high to tie the game up, 3-3.

The third period would end in a draw with the Firebirds up in shots 37-28.

In the overtime period, at 2:08, Vladislav Kolyachonok (2) scored to give the Firebirds the win, 4-3.

The next home game for the Rangers is on Friday, November 1 at 7:30 pm versus the Owen Sound Attack. The next away game is on Saturday, October 19 at 7:05 pm versus the Saginaw Spirit.