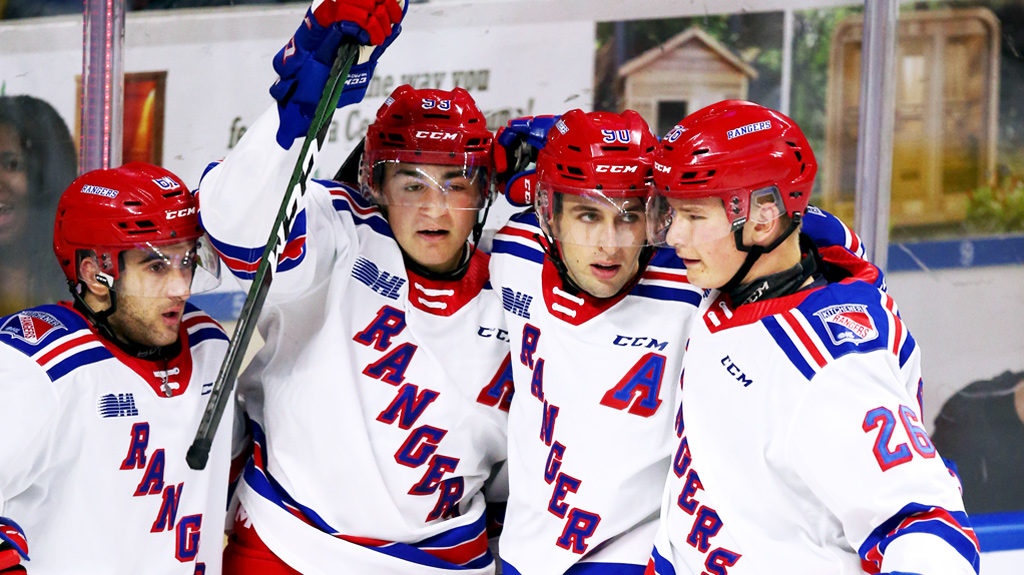 Kitchener, ON: It was the start of the Rangers 57th season at The Aud on Friday night as they played host to the Saginaw Spirit.

It was a back-and-forth game that saw the Spirit take the lead three separate times just for the Rangers to find a way to tie it up. In the end, it was the Rangers, in overtime, who earned themselves the win, 5-4, on a Ryan Stepien goal.

Jonathan Yantsis scored twice, and Reid Valade and Francesco Pinelli each scored as well. Liam Hawel, the newest Ranger, earned three assists and was a plus three on the night.

Jacob Ingham stopped 39 of 43 shots in the win.

The Spirit opened up the scoring at 12:30 of the first period when a shot rebounded off Jacob Ingham and into traffic in his crease. DJ King was in position to push the puck past Ingham to make it 1-0 at 12:30.

It wasn’t long before the Rangers managed to tie it up. At 14:16, Jonathan Yantsis tipped home a pass from Liam Hawel on Tristan Lennox’s blocker-side to make it 1-1.

Simon Motew picked up an assist on the game-tying goal, his first Ontario Hockey League point.

With just 35-seconds remaining in the period, Blade Jenkins, on a cross-ice pass from King, managed to slide one past Ingham to make it 2-1.

After the opening 20 minutes of play, the Spirit outshot the Rangers 14-7.

At 4:57 of the second period, the Rangers tied it up again and once again, it was the combination of Yantsis and Hawel, plus Michael Vukojevic, who got in on the action.

Yantsis broke across the blue line in a two-on-one, decided to keep the puck and wristed it over the glove of Lennox to make it 2-2.

During the Rangers second powerplay of the period, a Rangers turnover in their own end led to a goal by D.J. Busdeker at 10:53 to give the Spirit the lead for the third time of the game, 3-2.

At 16:19 of the second period, some roughing after the whistle led to two penalties for the Rangers and one for the Spirit.

Saginaw wasted no time on their powerplay to score an insurance goal. Cole Coskey fired it past Jacob Ingham from about the circle to make it 4-2 at 18:49.

When the second period ended, the Spirit remained ahead in shots, 29-16.

At 9:50 of the third period, a Ville Ottavainen shot rebounded off the pad of Lennox and onto the stick of an unmarked Reid Valade who made good on the opportunity to bring the Rangers within one, 4-3.

The Rangers Franceso Pinelli, at 14:27, scored his first OHL goal from a rebound on a shot by Hawel. It was 4-4.

Nothing could be settled in the remaining half-period so the game went to overtime.

In overtime, after a number of opportunities both sides, Valade found Ryan Stepien in front of the net and the left-winger put it past Lennox to give the Rangers an opening game win, 5-4.

Kitchener’s next game is on the road on Thursday, September 26 at 7:00 versus the North Bay Battalion. The Rangers return home on Friday, October 4 at 7:30 pm versus the Owen Sound Attack.