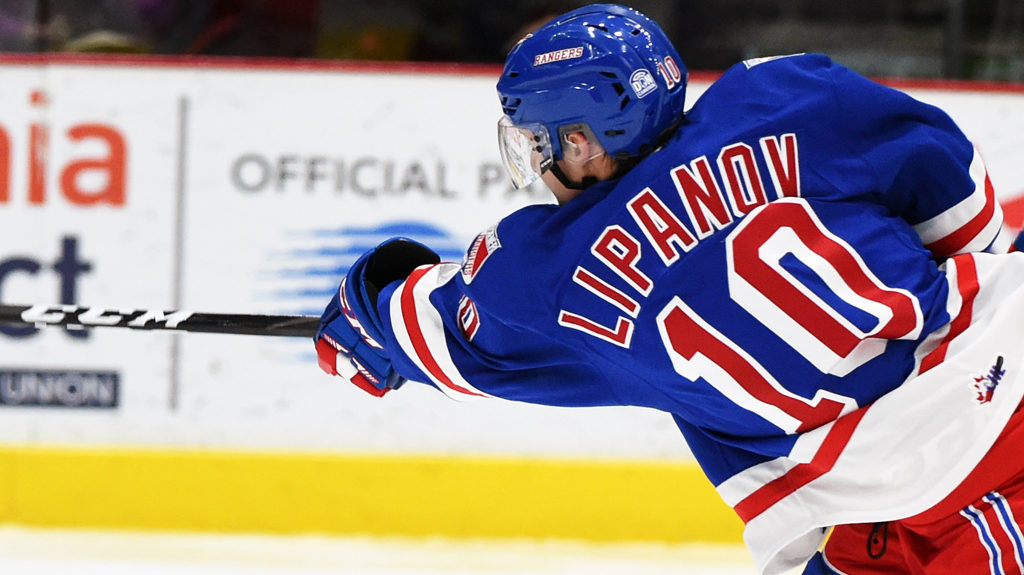 Lucas Pfeil stopped 22 of 30 shots on the night.

At 4:43 of the opening period, Guelph’s Cam Hillis took a slashing penalty that led to Kitchener’s first man-advantage of the game. The OHL’s second-best powerplay made good on the advantage on an Alexey Lipanov goal that beat Anthony Popovich for his sixth of the season. 1-0.

Rickard Hugg and Greg Meireles picked up assists on the opening goal.

Exactly three minutes after the Rangers scored, at 8:21, the Storm evened it up. Keagan Stevenson beat Lucas Pfeil on assists by Daniil Chyka and Nate Schnarr and it was 1-1.

Arber Xhekaj took his second penalty of the game at 10:28 on a trip and on the ensuing powerplay for the Storm, Hillis made up for his previous penalty that led to a goal by scoring a goal of his own, his sixth of the season. Ryan Merkley and Dmitry Samorukov earned assists of the go-ahead goal.

Guelph continued to put bodies in front of the net and it paid off when Cedric Ralph (9) redirected a Ryan Merkley shot that beat Pfeil. Barret Kirwin also picked up an assist to make it 4-1.

Kitchener’s penalty kill was busy in the first period. Kyle Gentles took a tripping penalty at 14:03 and then, at 15:08 a Jack York trip and unsportsmanlike conduct led to a 5-on-3 for Guelph. The Rangers shut down the two-man-advantage for the Storm and proceeded to hold off their Highway 7 rivals during the consecutive minor penalties to York to keep them in the game.

It was at 11:32 of the middle frame that Daniil Chyka picked up his second point of the afternoon on his third goal of the season to put the Storm up 4-1. Jack Hanley and Hillis earned assists on the goal.

Guelph extended their lead on Kirwin’s fifth goal of the season to make it 5-1.

Schnarr and Merkley were the helpers on the goal.

Stevenson buried his second of the afternoon on a cross-ice pass by Ty Collins and that made it 6-1.

9 seconds later, at 7:37, Hillis also scored his second of the afternoon and that made it 7-1.

Samorukov, at 17:03, scored his first goal of the season and that put the Storm up 8-1, which is how the game would end.