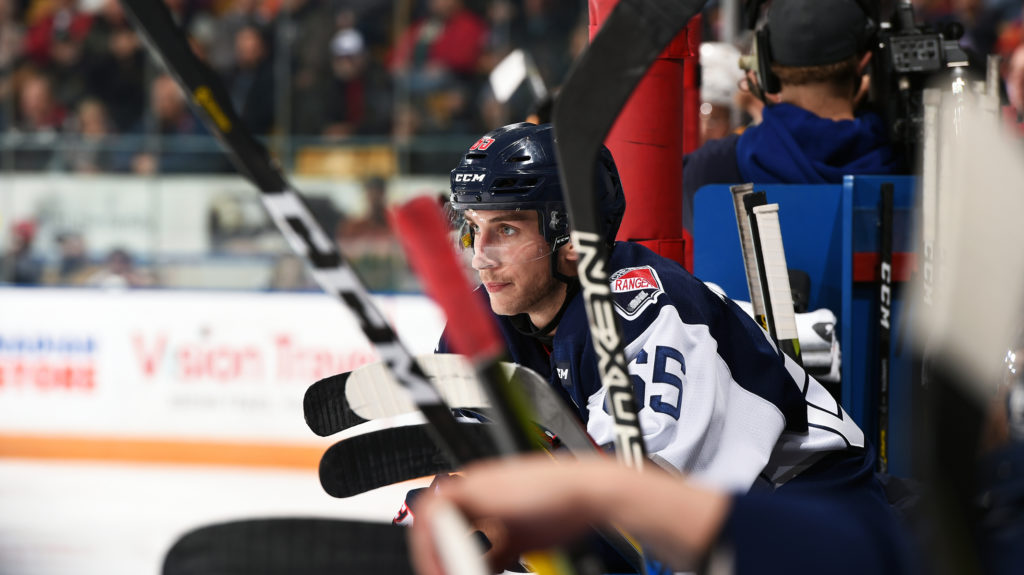 London, ON.: For the second-straight Sunday, it was the Knights and Rangers locking sticks in a midwest division showdown in London.

The Knights got out to a 1-0 lead on a powerplay goal by Conor McMichael on Luke Richardson and from there, the Knights retained the lead throughout the rest of the game, going on to win 5-1.

Alexey Lipanov was the Rangers’ lone goal scorer on the night with Joseph Garreffa and Jonathan Yantsis assisting on the play.

It was a Remembrance Day matchup in London as the Rangers traveled west down the 401 to play their division rivals for the third time this season.

The game’s first action came at 7:04 of the opening period when Greg Meireles took a roughing penalty on an elbow to the head of a Knights player while working for a puck in the offensive zone.

London capitalized on their man-advantage on a lucky pass that deflected off a Rangers player, onto the stick of the Knights’ Conor McMichael, and into the net for his team-leading 12th goal of the season. It was 1-0.

At 18:14 of the first, London’s Alex Turko scored his first goal of the season on a crisp pass from Even Bouchard that snuck by Kitchener’s Luke Richardson to make it 2-0, and that’s how the opening frame would end.

Approaching the midway point of the second, Evan Bouchard skated across the Rangers defensive zone and snapped a wrist shot over Richardson’s blocker to extend London’s lead, 3-0.

Then, at 15:23 of the second,  Liam Foudy found the back of the net and London’s fourth goal of the afternoon was Foudy’s seventh of the year.

After a post-whistle scrum nearing the end of the period that resulted in two Knights and one Rangers spending two minutes in the penalty box, Alexey Lipanov was able to score his third goal of the season with help from Joseph Garreffa, and Jonathan Yantsis.

The period ended with London up 4-1 and the shots on goal were 19-18 in favour of Kitchener.

Despite a number of quality chances by Kitchener in the third, it was London who scored first in the final frame on a goal by Nathan Dunkley, his sixth of the season.

Kitchener returns to action on Wednesday, November 14 at 11:00 am when they play the Erie Otters. The Rangers next home game is Friday, November 16 at 7:30 pm versus the Saginaw Spirit.