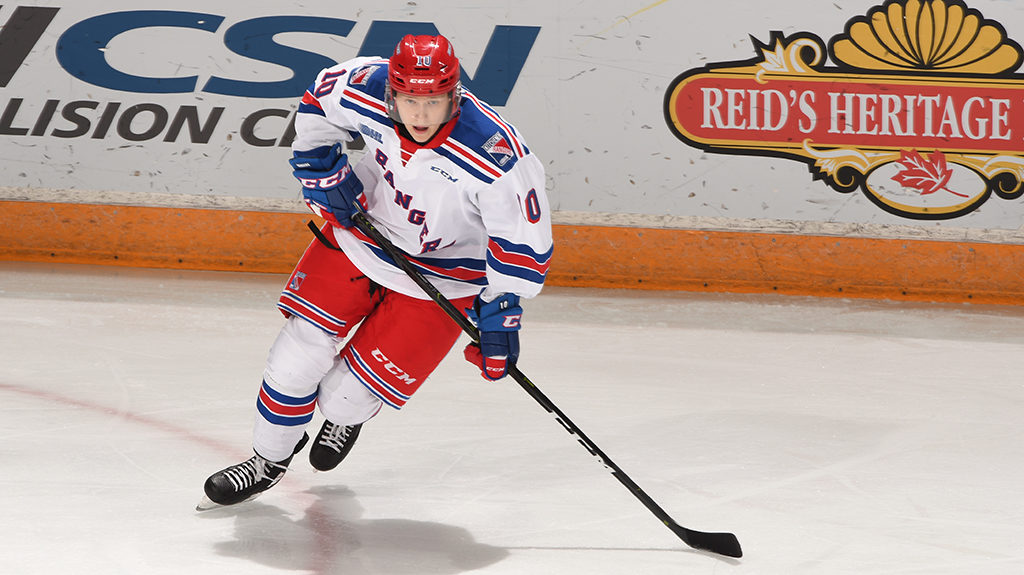 The Otters got out in front early and never looked back, beating the Rangers 5-1.

Donovan Sebrango was given a game misconduct after a hit to the head and subsequent fight.

Alexey Lipanov scored his fifth goal of the season while Michael Vukojevic and Greg Meireles each picked up an assist. Lucas Pfeil stopped 28 of 33 shots in the loss.

At 4:43 of the first period, the game’s first penalty went to Kitchener for too many men on the ice. On the ensuing powerplay, Erie’s Gera Poddubyni notched his 12th goal of the season and that put the Otters up 1-0.

On Erie’s eighth shot of the game on Lucas Pfeil, Petr Cajka found the back of the net for his eighth of the season on an assist by Kyle Maksimovich, his second of the night. After 14:03, it was 2-0.

It was at 16:12 that Erie opened their lead up to three when a cross-ice pass by Kurtis Henry deep in the Rangers defensive zone went off Maxim Golod’s stick and onto the stick of Brendan Sellan who made good on the opportunity to score his second goal of the season making it 3-0.

The period ended with the Otters up in shots, 11-5.

The Rangers Reid Valade took a high sticking penalty at 6:16 of the second period and then at 7:52, Maksimovich picked up his third point of the night and 13th goal of the season on assists from Poddubnyi and Jamie Drysdale to increase the Otters’ lead to 4-0.

At 16:01, Donovan Sebrango got a fighting major and a checking to the head penalty that led to a game misconduct. In retaliation to the hit, Sellan went after Sebrango and that melee led to him getting an instigator, fighting and 10-minute misconduct penalty.

On the 4-on-4, Alexey Lipanov scored his fifth of the season off a string of passes by Michael Vukojevic and Greg Meireles. The goal cut Erie’s lead to 4-1.

The period would end with 1:01 remaining on the Sebrango penalty and the Otters up in shots 23-15.

At of the third and final period, the Otters broke into the Rangers defensive zone on a two-on-one and Cajka capitalized, scoring his second of the night to put Erie up 5-1.

The Rangers next home game on Friday, November 30 at 7:30 pm versus the Niagara IceDogs. The next road game for Kitchener is on Sunday, December 2 at 2:00 pm vs the Guelph Storm