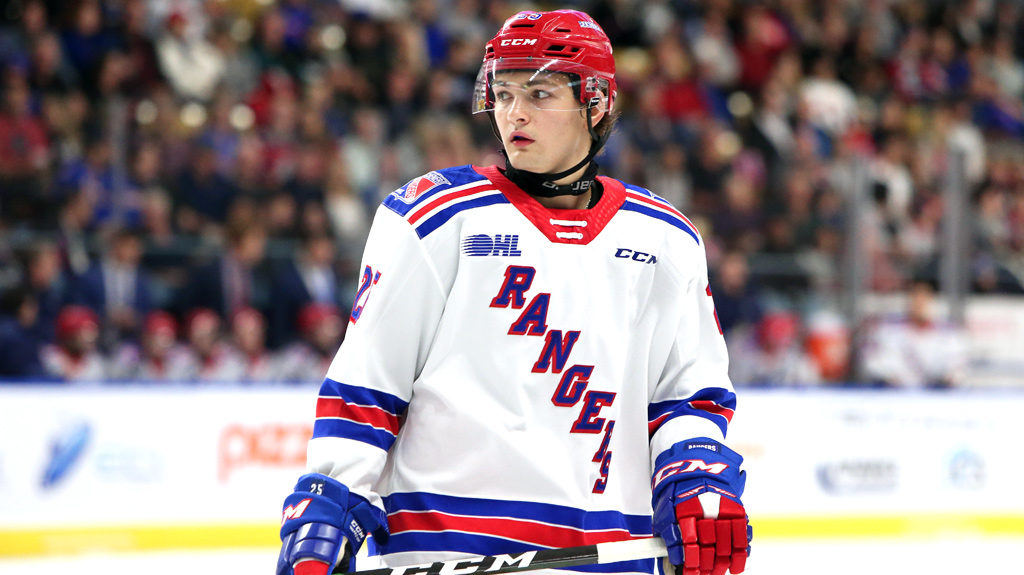 The Attack led 3-0 through two periods before the Rangers clawed back early in the third on goals by Ville Ottavainen and Declan McDonnell (his third in three games).

Owen Sound responded in-kind with two goals of their own later in the period to skate away with the 5-2 win.

Rangers goaltender Jacob Ingham made 31 saves in the loss.

Midway through the first, Barret Kirwin gained control of the puck in the Rangers defensive zone. As he made his way to the net, Arber Xhekaj slashed him to dispossess the centreman of the puck but took a penalty in the process.

As the power-play was winding down, Kirwin wired a wrist shot on net that beat Jacob Ingham at 11:37 to make it 1-0 for the Attack.

The Rangers had two power-plays in the opening frame but couldn’t capitalize. After 20 minutes, the Attack remained ahead on the scoreboard and in shots, 10-7.

While down a man, the Attack extended their lead at 12:13 of the second. Sustained pressure deep in the Rangers defensive zone led to a Kaleb Pearson finding Aidan Dudas for a one-timer to make it 2-0.

A short time later, Kirwin picked up his second goal of the game on a backward pass by Deni Goure from in-close on Ingham that Kirwin rifled high into the back of the net. It was 3-0 at 13:24.

After 40 minutes of play, the Attack continued to out-shoot the Rangers 30-16.

Kitchener got on the scoreboard at 1:36 of the third period. Off the face-off, Mike Petizian found Ottavainen (4) just outside the face-off dot and the defenseman fired a shot through traffic to make it 3-1.

McDonnell also picked up an assist on the goal.

At 2:06, Stepan Machacek took a roughing penalty that put the Attack down a man. On the ensuing power-play, the puck found McDonnell (3) in-close and the rookie didn’t miss, scoring his third goal in as many games to make it 3-2 at 3:05.

Seconds after the Rangers went on their fifth power-play of the game, Matthew Philip found himself breaking across the Rangers blue line on a breakaway that he wristed past Ingham to make it 4-2 at 14:52.

The Attack put the game out of reach at 17:31 when Adam McMaster tipped a Sergey Popov shot past the extended pad of Ingham to make it 5-2.

all news Alumni
A doctor’s journey from East Ave. to the West Coast
5 days ago