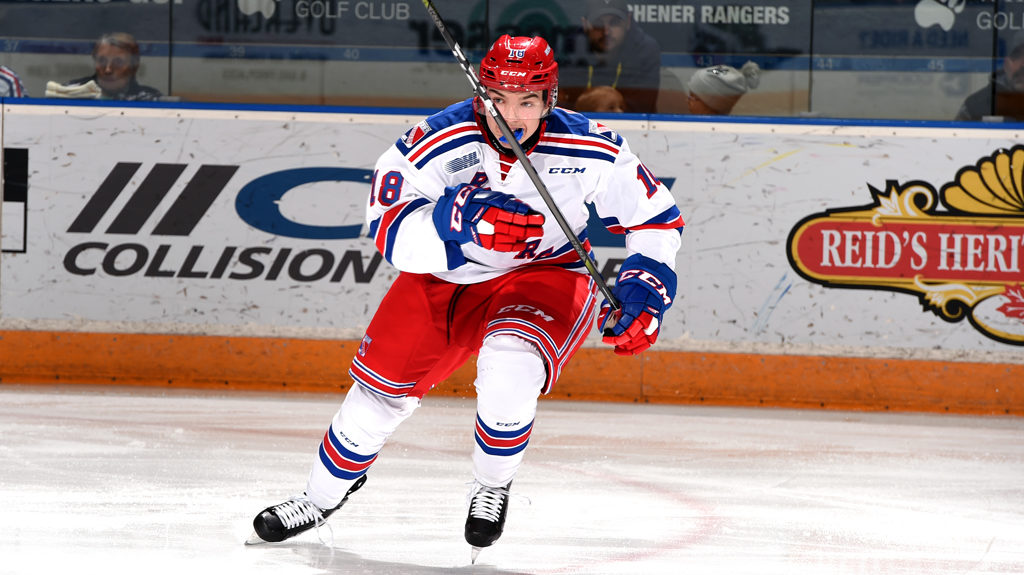 St. Catharines,ON.: The Rangers (27-26-3-1) visited the IceDogs (35-15-7-0) for their second meeting of the season on Thursday night. The IceDogs scored four goals on Luke Richardson and another six on Lucas Pfeil in the 10-2 win over the Rangers.

Graham Dickerson and Justin MacPherson were the goalscorers for Kitchener. The IceDogs outshot the Rangers 37-33.

Kirill Maksimov (33) opened the scoring at 2:33 of the first period for Niagara on a back-door pass from Drew Hunter to make it 1-0. Daniel Bukac picked up the second assist.

The IceDogs capitalized on a Michael Vukojevic tripping penalty on a point shot from Jack Studnicka (24) at 4:22 with assists going to Matt Brassard and Jason Robertson.

Graham Dickerson (1) cut the IceDogs lead in half with his first goal of the season at 13:30. Joseph Serpa and Joseph Garreffa both picked up assists on the goal.

At 19:46 Studnicka scored his second goal of the night on the powerplay from the point with assists coming from Brassard and Akil Thomas.

Lucas Pfeil started the second period for the Rangers.

Studnicka netted his third powerplay goal of the night for the hat trick at 2:46 of the 2nd on a Justin MacPherson penalty. Ben Jones and Robertson assisted the goal making it 5-1 IceDogs.

The Rangers were unable to capitalize on a Mason Howard hooking penalty.

Studnicka scored his fourth of the night on the penalty kill at 18:03.

Only 34 seconds later, Thomas made it 7-1 IceDogs with the assists coming from Johnathon Schaefer and Oliver Castleman.

The period would end with the IceDogs outshooting the Rangers, 24-23.

Niagara opened the third with a short-handed goal from Maksimov at :31. Jones picked up the assist, making it 8-1 IceDogs.

Sopa scored his second of the night to make it 10-1 IceDogs.

Justin MacPherson scored his third of the season at 19:35 with the assists coming from Greg Meireles and Kyle Gentles.

That would do it for the game with a final score of 10-2 for Niagara.

The final shots on goal were 37-33 for the IceDogs.

The Rangers next home game is on Friday, February 22 at 7:30 pm versus the Sault Ste. Marie Greyhounds. The next road game for Kitchener is on Wednesday, February 27 at 11:00 am versus the Mississauga Steelheads.