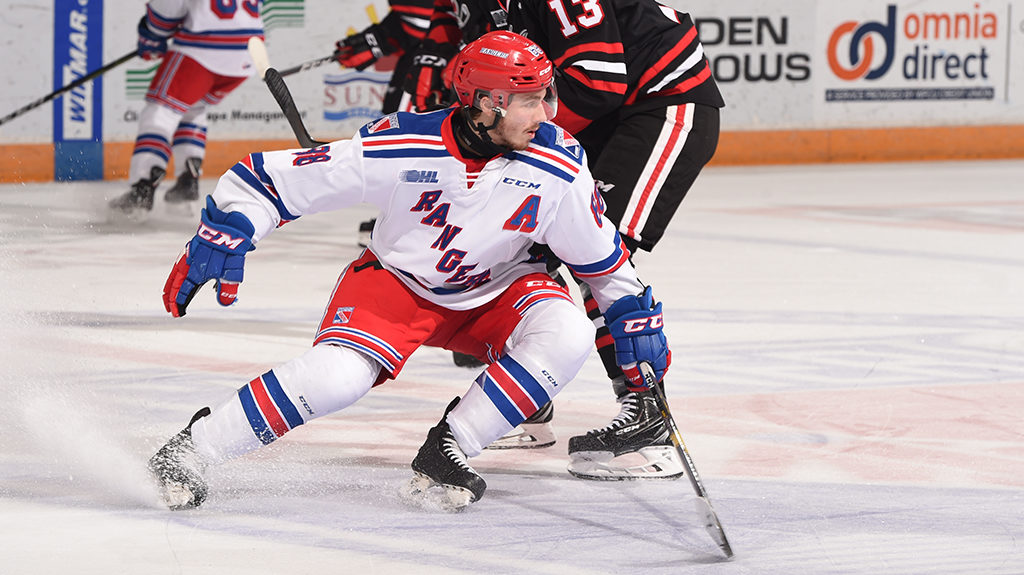 Luke Richardson started the game in net at let in six. Lucas Pfeil was brought in for the third period and let in one.

Greg Meireles scored both the goals for the Rangers, his 11th and 12th of the season.

The game’s first action on the scoresheet occurred shortly after a Jonathan Yantsis hooking penalty at 14:31 of the opening period. On the ensuing powerplay, at 15:27, Kirill Maksimov beat Luke Richardson to net his 14th goal of the season on assists by Ben Jones and Jason Robertson.

Shortly after, at 18:13, Akil Thomas (11) extended the IceDogs lead on seamless passes by Philip Tomasino and Robertson.

The period would end with Niagara up 2-0 and leading in shots 7-4.

10 seconds into the second period, Niagara widened their lead when Maksimov scores his second goal of the night on an assist by Jones to make it 3-0 IceDogs.

Kitchener broke the goose egg at 12:01 of the second period while shorthanded. Greg Meireles and Chase Campbell broke towards the Niagara goal with only one IceDogs defender back and Meireles made good on the opportunity, wiring home is 11th of the season on the Campbell assist. 4-1.

Robertson continued his stellar night at 15:25 when a pass across the Rangers blue line left him in a two-on-one where he elected to shoot and score his 26th goal of the season on assists by Tomasino and Daniel Bukac. 5-1.

Niagara extended their lead to five at 17:11 on a goal by Jones, assisted by Maksimov. 6-1.

The second period ended with the IceDogs up in shots 22-13.

The third period started with fireworks.

Lucas Pfeil was brought in in relief and just 29 seconds into the frame, he was hit hard behind the net, which resulted in a goaltender interference penalty that led to a melee in front of the Kitchener bench that led to a total of two Rangers and three IceDogs in the penalty box.

On the Kitchener man-advantage, Meireles scored his second of the night when he tapped in a puck Niagara goalie Stephen Dhillon thought he had underneath his glove. Meireles’ 12th goal of the season made it 6-2.

Isaac Langdon and Alexey Lipanov earned assists on the play.

The final goalie stats for the Rangers was six goals on 22 shots for Richardson and one goal on 12 shots for Pfeil.

In total, the IceDogs outshot the Rangers 34-19.

The Rangers next game is on Sunday, December 2 at 2:00 pm versus the Guelph Storm. The next home game for Kitchener is on Friday, December 7 at 7:30 pm vs the North Bay Battalion.

all news community
Rangers and Sting complete trade
4 hours ago