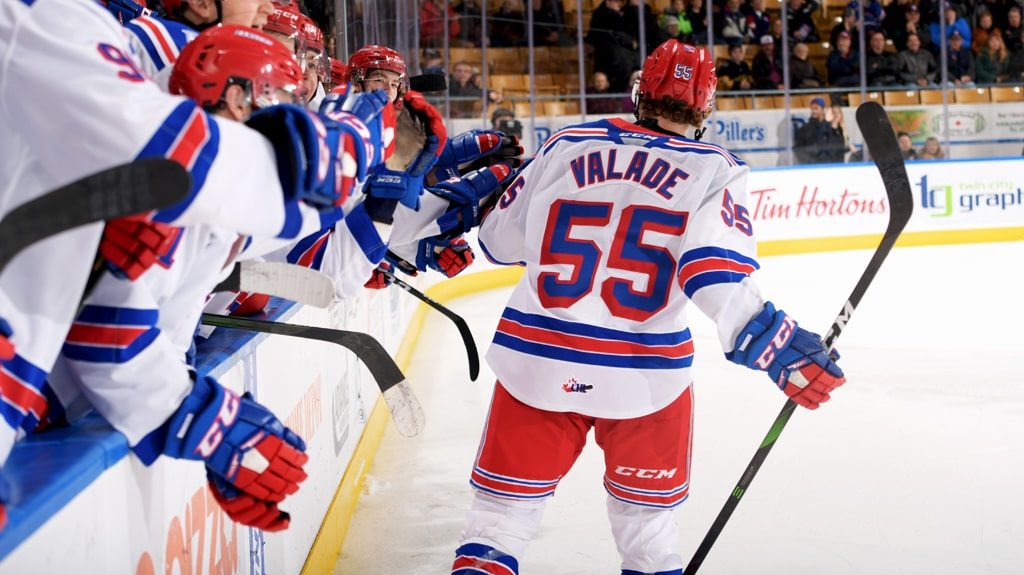 Kitchener, ON: Sunday afternoon at The Aud featured another Midwest Division matchup, this time between the Rangers (10-10-2-2) and the Guelph Storm (15-5-1-3).

Reid Valade scored his eighth goal of the season at 18:36 of the first period. It was the game’s only goal until there was 35 seconds left in the third and Michael Vukojevic scored an empty netter. Danny Zhilkin would break Jacob Ingham’s shutout with five seconds left in the game. The Rangers would win 2-1.

Jacob Ingham, the games third star, stopped 21 in the win for Kitchener’s third win in a row.

The first goal of the period came at 18:36. Reid Valade stripped a Storm defender of the puck, circled across the top of the offensive zone then sniped the puck over the blocker of Nico Daws to make it 1-0.

After 20 minutes of play, the Rangers outshot the Storm 8-7.

There was no scoring in the second period but the Rangers doubled up the Storm in shots, 16-8 in a period they dominated in respect to shots and time of possession.

Donovan Sebrango took a match slew-foot penalty at 16:00 of the third period that gave the Storm a powerplay for the remainder of the game.

With 35 seconds remaining in the game, from behind the Rangers goal line, Michael Vukojevic lifted a puck past the Storm defenders and into the back of Guelph’s empty net to give the Blueshirts a 2-0 lead.

Then, at 19:55, Danny Zhilkin broke the shutout for the Rangers to make it 2-1 and that’s how the game would end.