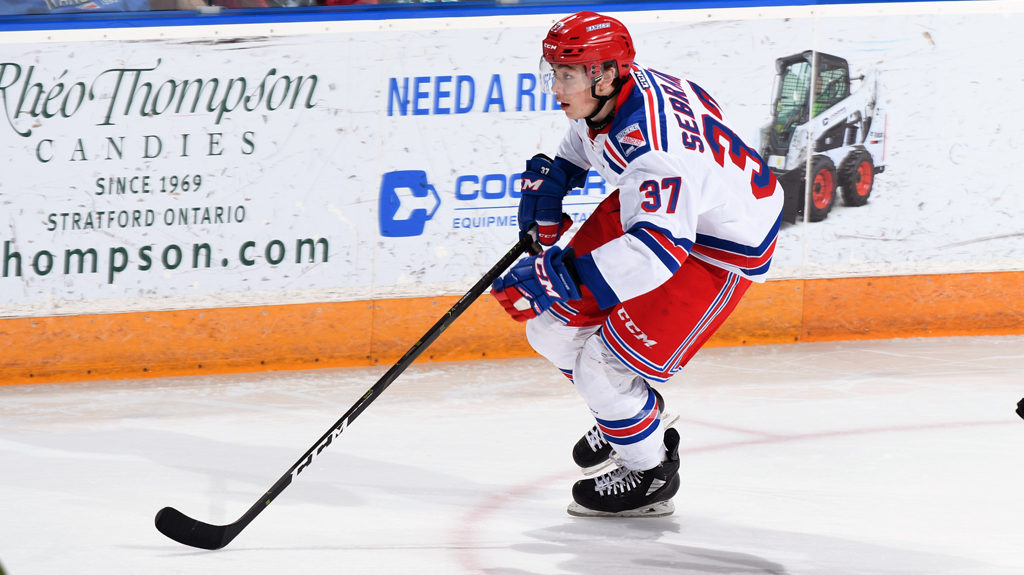 Jonathan Yantsis, Donovan Sebrango, and Joseph Garreffa were goalscorers for the Rangers who, as of the final buzzer, moved to within one point of the fifth-place Owen Sound Attack in the Western Conference. Luke Richardson stopped 17 shots in the win.

It was the Rangers who opened up the scoring in Kingston on Monday afternoon. Greg Meireles split three Frotenacs defensemen as he skated down the centre of the ice before passing it to Jonathan Yantsis who wristed it low and over the pad of Brendan Bonello to make it 1-0.

Kitchener controlled the play for the great majority of the period, but Bonello and the Frotenacs managed to keep the visitors off the board for the remainder of the first.

The Rangers were ahead in shots after 20 minutes of play, 9-3.

Kingston came out with the momentum in their favour to start the second period. Zayde Wisdom, from Luke Richardson’s left-side, made a drop pass to Nick Wong who had a shot on net that was saved by the Rangers netminder but the rebound went immediately back to Wong who buried his 12th goal of the year to make it 2-1.

After a string of chances for the Frontenacs, the Rangers brought it deep into Kingston’s end. Meireles made a pass to Joseph Garreffa, who found a streaking Donovan Sebrango, a native of Kingston, and he fired home his fifth goal of the season to make it 2-1 at 9:39.

At 10:55, the Rangers extended their lead when Reid Valade showed great patience before making a pass to his left-side that found Garreffa who made good on the opportunity to score his 21st of the season. 3-1.

For the second-straight period, Kitchener controlled the puck for the vast majority of the time and that led to a substantial lead in shots over the Frontenacs, 27-9.

Just over halfway through the third period, at 11:03, the Frontenacs pulled within a goal when Tyler Burnie, off some scrappy play coming into the Rangers’ end, found a way to wire home his sixth goal of the season, top corner on Richardson, to make it 3-2.

Despite a flurry of opportunities for the Frontenacs to end the third period, Richardson and the rest of the Rangers held onto their lead for the win.

The Rangers next home game is on Friday, February 22 at 7:30 pm vs the Sault Ste Marie Greyhounds. The next road game for Kitchener is on Thursday, February 21 at 7:00 pm vs the Niagara IceDogs.