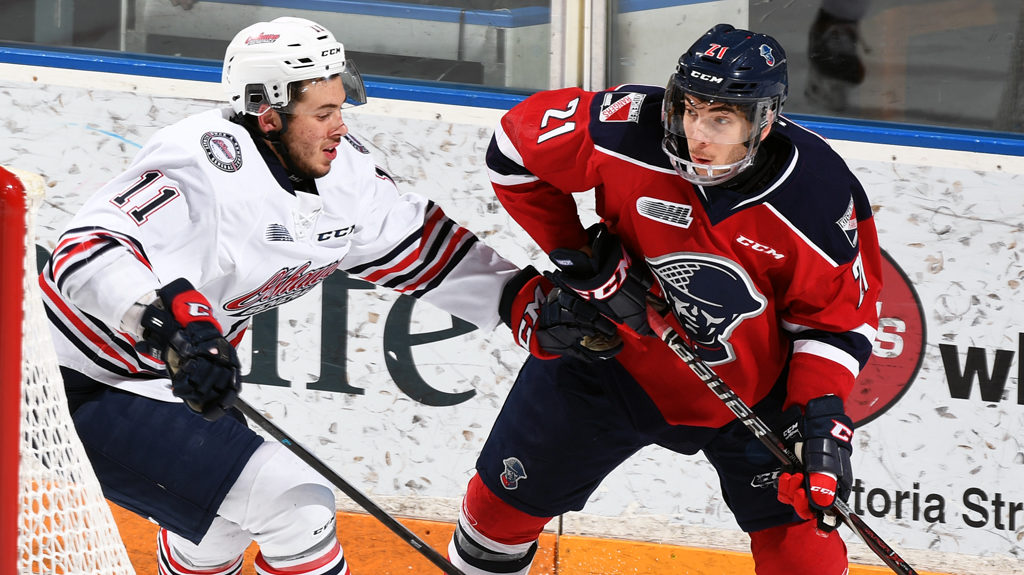 After Oshawa jumped out to a 2-0 lead, Nick McHugh put Kitchener on the board midway through the second period, which queued up the tossing of teddy bears.

The Generals extended their lead to 3-1 before Donovan Sebrango scored his first goal in the OHL to bring the Rangers within one, 3-2.

A Greg Meireles goal late in the third brought the game into overtime where the Generals scored just 44-seconds into the extra frame to win 4-3.

Besides each side exchanging a couple penalties in the opening 20 minutes, no team was able to find the back of the net.

Luke Richardson stopped all 16 shots he faced and on the offensive side of the puck, the Rangers were able to muster four shots on net.

At 1:51 into the second period, as the Rangers penalty was winding down, the Generals opened up the scoring on a shorthanded goal by Serron Noel, his 18th, to put Oshawa up 1-0.

At 4:32, Danil Antropov added to the Generals lead on his eighth goal of the season to make it 2-0.

The Rangers got on the board at 8:34 on Nick McHugh’s seventh of the season, which kicked off the annual teddy bear toss. Joseph Garreffa and Michael Vukojevic earned assists on the goal. 2-1.

The period would end with a breakaway for McHugh that was denied by Oshawa’s Kyle Keyser to keep the score at 2-1 heading into the final frame.

The Generals continued to outshoot the Rangers 32-22.

Michael Vukojevic took a high sticking penalty just 33 seconds into the third period and at 2:20, Giovanni Vallati scored his seventh of the season to put the Generals back up by two, 3-1.

It didn’t take long for the Rangers to fire back. Donovan Sebrango scored his first goal of the season at 4:05 to make the score 3-2.

After pulling Richardson with just over one minute left in the game, Greg Meireles scored his 13th of the season on assists by Rickard Hugg and Garreffa. The goal also extended Meireles’ point streak to 9 games. 3-3.

Just 44 seconds into the overtime period, the Generals’ Noel scored his second of the night to give Oshawa the win, 4-3.

Kitchener was outshot on the night 41-37.

The Rangers next home game is on Friday, December 28 at 7:30 pm versus the Barrie Colts. The next away game for Kitchener is on Thursday, December 13 at 7:00 pm vs the North Bay Battalion.