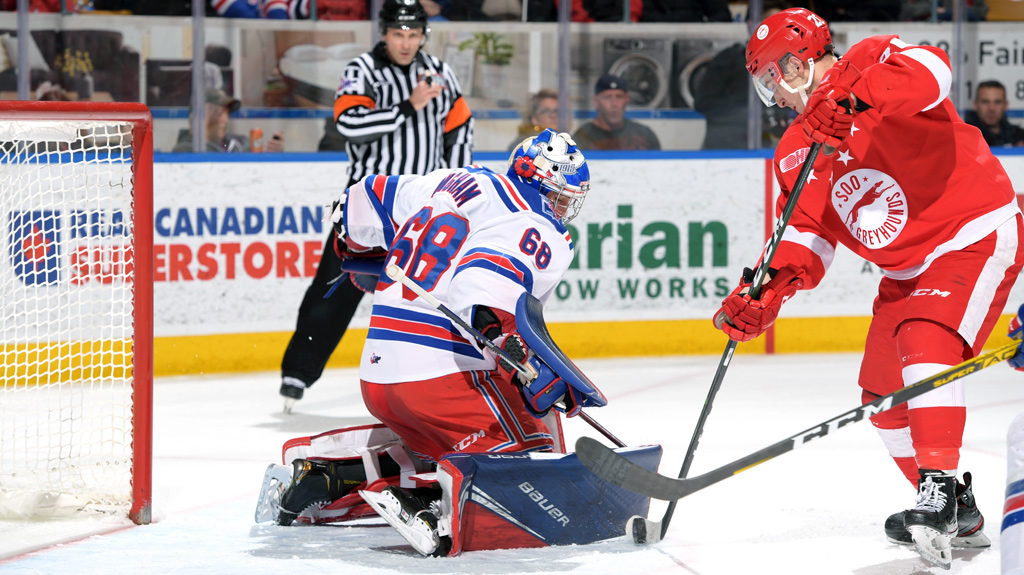 Justin MacPherson, Isaac Langdon, and Axel Bergkvist were the Rangers goalscorers on the night.

Jacob Ingham saved 25 in the loss.

The Rangers opened up the scoring at 17:04. After sustained pressure in the Greyhounds’ end, a pass out to Justin MacPherson (2) was shot through traffic and into the back of the net to make it 1-0.

Greg Meireles and Mike Petizian picked up assists on the opening goal. With that assist Meireles earned his 200th career OHL point.

There was no further scoring in the opening period of play. The Rangers led in shots after 20 minutes, 14-9.

At 9:27 of the second, Joseph Serpa took a tripping penalty. On the ensuing Greyhounds powerplay, Tye Kartye (14) snuck the puck past a scrambling Jacob Ingham to tie the game up, 1-1.

The Rangers regained the lead at 14:36 when a number of chances in front of Bailey Brkin was eventually finished off by Isaac Langdon (2) who squeezed one through to make it 2-1.

Declan McDonnell and Ryan Stepien picked up assists on the goal.

Kitchener added to their lead at 4:43 of the third when Axel Bergkvist (3) uncorked a shot from above the hash marks past Brkin and it was 3-1.

Riley Damiani picked up an assist on the goal.

At 9:09, a shot through heavy traffic snuck by Billy Constantinou (7) snuck by Ingham’s right pad and that brought The Soo within one, 3-2.

The Greyhounds tied it up at 11:07 when a Jacob Leguerrier beat Ingham on a slap shot from outside his left faceoff circle and the game was tied. 3-3.

At 12:54, another shot through traffic by Drew Wawrow (1) gave the Greyhounds their first lead of the game, 4-3.

Sault Ste. Marie added an empty-netter from Leguerrier with 34.5 seconds left in the game to take the contest 5-3.

Shortly after, the Rangers surrendered another goal, this time to Rory Kerins (23), to make it 6-3.