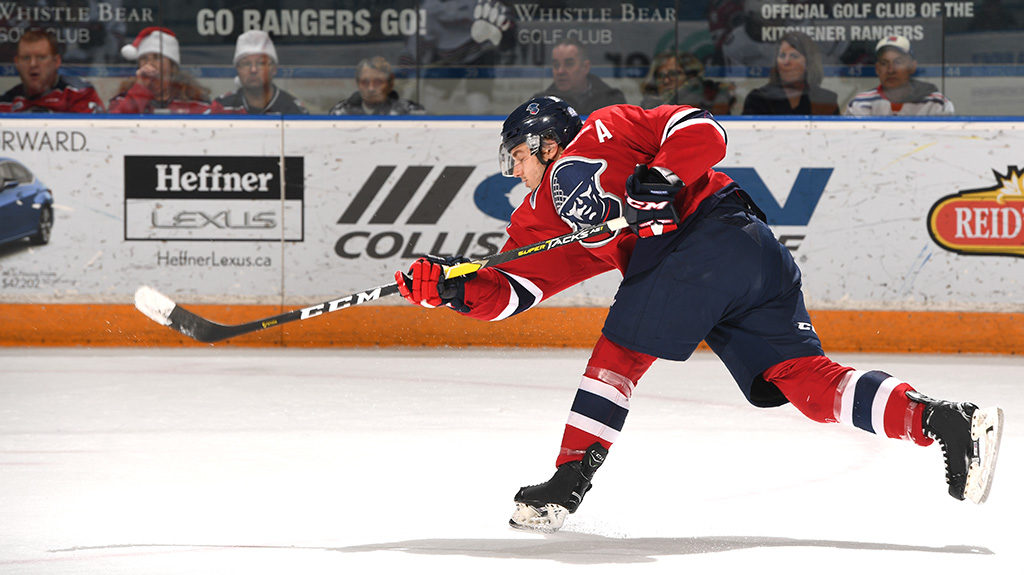 Donovan Sebrango (2), Greg Meireles (15), and Ryan Stepien (3) were the goal scorers for Kitchener while the only goal surrendered by Luke Richardson was an unfortunate deflection off Michael Vukojevic just 19 seconds into the game.

Just 19 seconds into the game, on Peterborough’s first trip into their offensive zone, a puck deflected off of Michael Vukojevic and past Luke Richardson to put the Petes up 1-0.

The goal was given to Christopher Paquette and was unassisted.

At 4:33, the Petes John Parker-Jones took a cross-checking penalty in the Rangers offensive end and on the ensuing powerplay, Eric Guest and Nick McHugh set up Donovan Sebrango with the rookie defenseman’s second goal of the season to knot the game up, 1-1.

The first period ended with the Rangers outshooting the Petes 21-6.

Max Grondin took a hooking penalty at 7:26 of the second period that gave Kitchener their third powerplay of the game.

At 7:40, a pass from Riley Damiani to Greg Meireles, who was celebrating his birthday, led to a couple of dekes from the assistant captain and a shot that beat Hunter Jones to give the Rangers their first lead of the game on their second powerplay goal of the game, 2-1.

Exactly two minutes later, Ryan Stepien added to Kitchener’s lead by netting his third of the season on an assist from Nick McHugh. It was 3-1 at 9:40.

The second period would end with the Rangers up two and leading in shots, 32-17.

The third period featured a hit post each for Kitchener and Peterborough and a number of chances for the Rangers on a Petes empty net, but ultimately, the score wouldn’t change from 3-1.

Peterborough was outshot by Kitchener 46-25.

The Rangers next home game is on Friday, January 4 at 7:30 pm versus the Owen Sound Attack. The next road game for Kitchener is on Saturday, January 5 at 7:05 pm versus Saginaw.