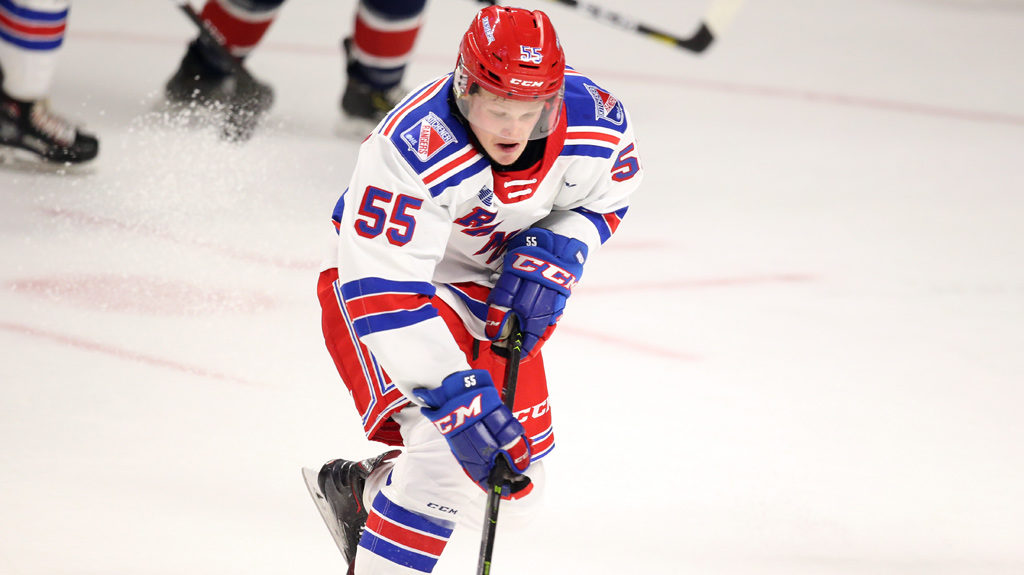 Kitchener got goals from Reid Valade, Ville Ottavainen, and Mike Petizian. For all of them, it was their third goal of the season and for Ottavainen, it was his second in as many nights.

Unfortunately, a second period that saw the Rangers get outshot 15-3 gave the Spirit a lead they wouldn’t surrender in their 5-3 win.

Lucas Pfeil stopped 25 in the loss.

Reid Valade (3) opened up the scoring for the Blueshirts at 6:03 of the first period when a neutral ice turnover led to a two-on-one break for the Rangers. The right-winger elected to shoot the puck and it went over the right pad of Tristan Lennox to make it 1-0.

At 15:27 Francesco Pinelli took a defensive zone hooking penalty to prevent Cole Perfetti from scoring in-close on Lucas Pfeil. On the ensuing powerplay, Perfetti made a cross-ice pass to Cole Coskey (10) who shot it past Pfeil to tie it up, 1-1 at 16:04.

The Rangers earned back the lead at 18:52 when Greg Meireles dished it out to Ville Ottavainen (3) who stepped into his second goal in as many nights to make it 2-1.

Valade took a hooking penalty early in the second period at 4:32.

On the powerplay, Damian Giroux from behind Pfeil’s net, passed it out front to Perfetti (4) who wristed a shot, short-side into the roof of the net to tie the game, 2-2.

At 12:27, Riley Damiani took a delay of game penalty for making a hand pass off a faceoff in the defensive zone. For the third time in the game, the Spirit capitalized on the man-advantage.

This time it was Ilya Solovyov setting up Perfetti (5) for a one-timer he squeezed through the five-hole of Pfeil to give the Spirit their first lead, 3-2.

Just 36-seconds later in some traffic in front of Lennox, Declan McDonnell passed to Mike Petizian (3) who had his shot squeak through the pad of a sprawling Lennox to even it up, 3-3.

It didn’t take long for the Spirit to pull ahead once again. Mason Millman on an assist from Camaryn Baber at 17:01, scored his third of the season to put Saginaw up, 4-3.

The period would end with the Spirit pulling ahead in shots, 23-21.

Saginaw extended their lead at 9:44 when Coskey passed to Perfetti who found Giroux in close and the Spirit’s leading scorer earned his 12th to extend their lead to 5-3, which is how the game would end.

The Rangers outshot the Spirit 32-30.