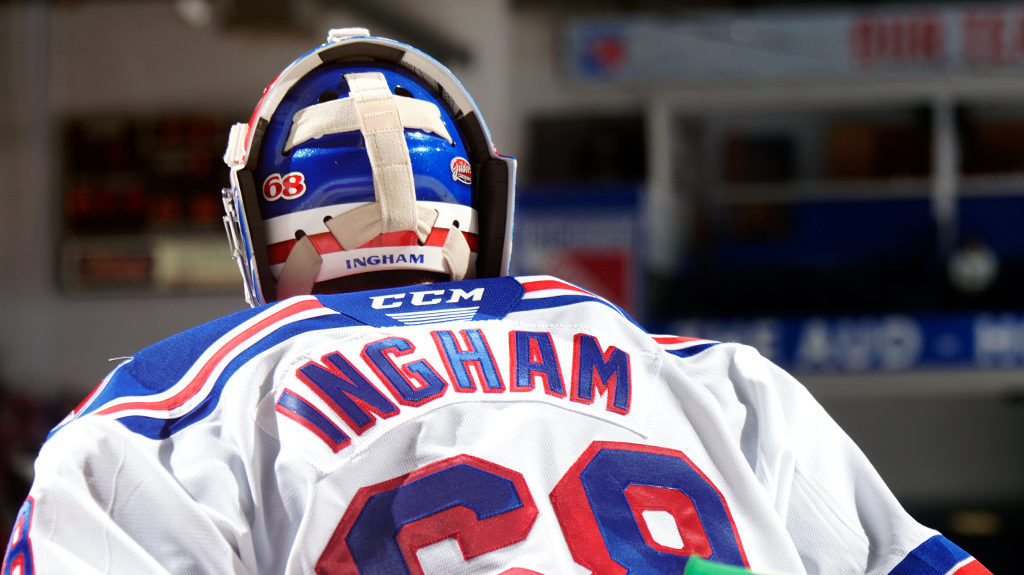 Kitchener, ON: The Windsor Spitfires (4-3-1-0) were at The Aud on Friday night to square off against the Rangers (4-1-1-2) in the first of two Thanksgiving long weekend home games for the Blueshirts.

The Rangers started hot out of the gate logging three goals before the eight-minute mark of the first period. Riley Damiani, Jesse Fishman, and Liam Hawel all scored for the Rangers. The goal by Fishman was his first in the OHL.

Jean-Luc Foudy scored in the second period for Windsor but that’s as close as the visitors got.

The 3-1 win was capped off by another terrific performance by Jacob Ingham who saved 43 on the night.

The game began with a flurry of chances for the Rangers that included a save of the year calibre stop by Spitfires netminder Xavier Medina. A short time later, at 2:35, Riley Damiani (5) wristed one into the back of the net from the high slot to make it 1-0.

The goal was assisted by Liam Hawel and Donovan Sebrango.

At 6:24, as he was drifting away from the net towards the blueline, Jesse Fishman let a wrist shot go that went through a crowd and past Medina to add an insurance market for the Rangers and it was 2-0.

Windsor’s Will Cuylle took a two-minute penalty for a blindside hit on Sebrango at 6:45. On the ensuing powerplay, Liam Hawel (2) scored his second goal of the season on assists by Damiani and Greg Meireles to put the Rangers up 3-0.

In the second period, at 9:26, Jean-Luc Foudy skated a couple of circles around the faceoff dot to Ingham’s left side before firing a shot high, blocker-side on the Rangers netminder to get the Spitfires on the board. It was 3-1.

The remainder of the period would see no more action on the scoreboard. Windsor pulled ahead in shots, 28-21.

Kitchener’s lead stood throughout the entirety of the third period thanks to another spectacular performance by Ingham who saved 43 shots. It was the second time this season Ingham logged at least 40 saves.