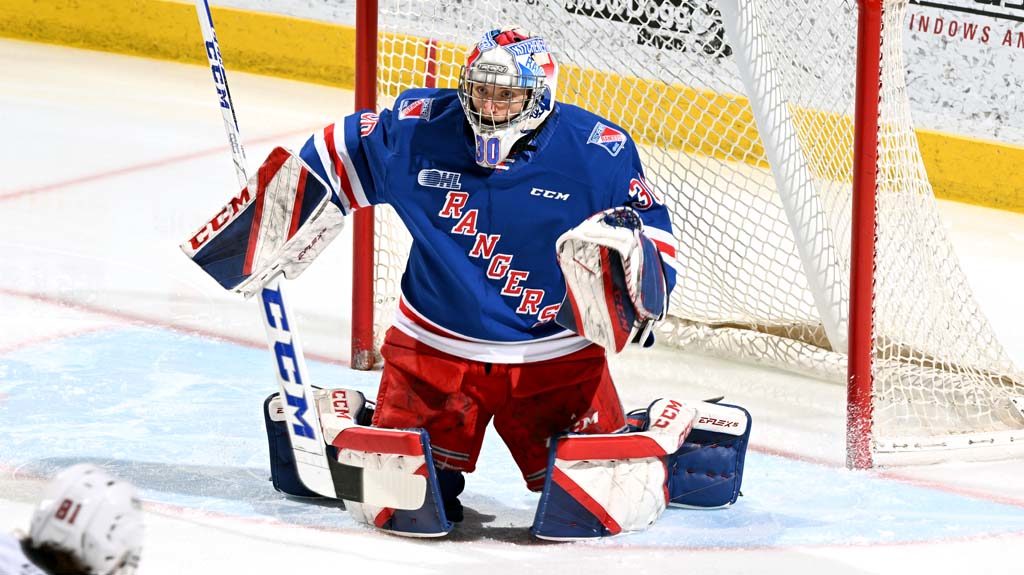 The Kitchener Rangers hosted The Windsor Spitfires at The Aud for game four of the series. The Rangers hope to tie the series at 2-2 before heading down the 401 to Windsor for game five on Saturday.

The first half of the 1st period was even, with both teams trading four shots a piece. Neither team wanted to make a mistake in this crucial game four matchup. After some consistent pressure by the Rangers, Mitch Martin made it worth it by opening the scoring and making it 1-0. Trent Swick took a elbowing penalty but thanks to the work of the the penalty killers and Pavel Cajan, the Rangers got away without any damage. Just after, Navrin Mutter made a beautiful one-time pass to Carson Rehkopf who blasted the puck into the back of the net, extending the lead to 2-0.

Due to leftover powerplay time for Windsor that carried into the 2nd period, they scored early to make it a 2-1 game. On a scramble in front of Cajan, Windsor managed to sneak the puck in, tying the game 2-2. The Rangers had a long 5-on-3 powerplay opportunity but were unable to score and regain the lead. Windsor grabbed a loose puck off a faceoff and put one past Cajan to grab a 3-2 lead. They added another to make it 4-2 with six minutes left in the middle frame.

Just before the midway point of the 3rd period, Carson Rehkopf scored his second goal of the game to get the Rangers back within one and make it 4-3. Windsor scored a flukey goal to regain their two goal lead, making it 5-3. Although the Rangers pulled their goalie to try to get even but Windsor ended up scoring in the empty-net, extending their lead to 6-3. Windsor takes a 3-1 series lead but the Rangers will look to keep their playoff run going with a win.