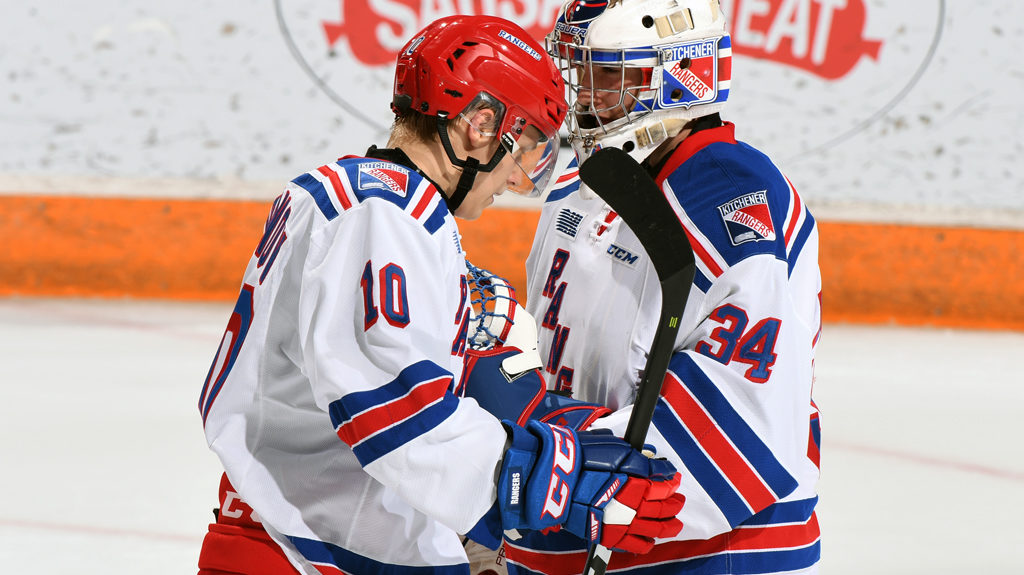 Mississauga, ON: It was a battle of the fifth-place teams in either conference on Wednesday afternoon in Mississauga as the Rangers (30-26-3-1) took on the Steelheads (29-24-5-2) at the Paramount Fine Foods Centre.

Riley Damiani scored twice, Joseph Garreffa got one goal and two assists, and Greg Meireles’ assist on the third goal extended his point streak to 12 games as the Rangers beat the Steelheads 3-2.

Luke Richardson had himself a big night in net, stopping 39 of 41 shots.

The first period provided plenty of action for both goaltenders. Luke Richardson made 15 stops and Jacob Ingham made 12 stops in what ended up being a scoreless opening 20 minutes.

Mississauga committed three penalties in the first to Kitchener’s two, but neither team could break the deadlock.

The Steelheads went into the first intermission with 1:49 seconds remaining on a powerplay that was the result of a Mike Petizian hook.

It took until 7:11 of the second period to see a goal between the East and West Division’s fifth-place teams. Kyle Gentles passed to Alexey Lipanov who found Joseph Garreffa down low. Garreffa skated in front of Ingham’s crease and slid it five-hole for the assistant captain’s 22nd goal of the season to make it 1-0.

Despite being heavily outshot halfway through the period, the Rangers extended their lead at 8:33 when Riley Damiani, on assists from Michael Vukojevic and Garreffa, went high on the Steelheads netminder to make it 2-0 on just five shots in the period.

On the Rangers fifth powerplay, Rickard Hugg thought he had a goal when an opportunity from in-close in Ingham looked like it crossed the goal line and was even called a goal on the ice. However, after a lengthy review, the Rangers captain’s goal was called back, keeping the lead at two goals.

Just 15 seconds after the no-goal by Hugg, on the same powerplay, Damiani picked up his second goal of the contest on a hard one-timer that came on the back of some quality passing from Garreffa and Greg Meireles to make it 3-0.

The period would end with Mississauga ahead in shots, 31-24.

The Steelheads finally found a way to beat Richardson at 7:32 on their 36th shot of the game when Cole Schwindt scored his 16th goal of the season to keep the home team in it. 3-1.

Just 49 seconds later, Keean Washkurak cut the Rangers lead to one on his 14th of the season and it was 3-2.

With under two minutes left in the third period, the Steelheads gave the Rangers their 9th powerplay of the afternoon and that solidified the win for the Rangers who sweep the only two games they will play against Mississauga this regular season.

The Rangers next home game is on Friday, March 1 at 7:30 pm vs the London Knights and Sunday, March 3 vs Guelph at 2 pm. The next road game for Kitchener is on Wednesday, March 6 at 7:00 pm versus the Hamilton Bulldogs.